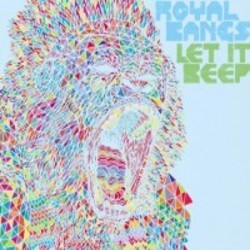 Let it Beep, the follow up to Royal Bangs’ debut We Breed Champions, is a record that doesn’t quite know what or where it wants to»

royal bangs release their thrill-a-minute second album, the wittily-titled 'let it beep' on city slang. one of the most original and thrilling us acts to emerge over the past few years, royal bangs are five electric gents from knoxville, tennessee' first picked up on by the black keys' patrick carney, who signed them to his audio eagle label in the us. royal bangs have been likened to 'a collision between accelerated atomic particles of radiohead and the stooges'. 'let it beep' was recorded in february at tangerine sound studios in akron, ohio and finds the band's sound looking more than ever in two seemingly conflicting directions: an increased emphasis on the electronic - from syrup-thick synths to dance-based drum programming - coupled with earnest echoes of 70s rock legends like springsteen and thin lizzy. but the core of their sound, rooted in classic indie rock and hook-heavy arrangements.
description from www.roughtrade.com