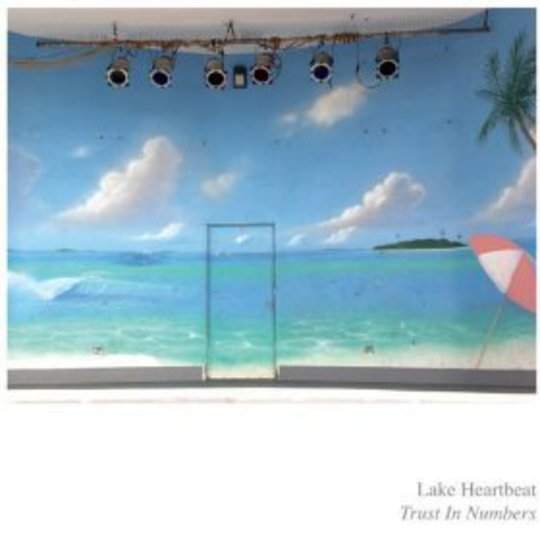 With the right knowledge it's easy to tell what Lake Heartbeat are going to sound like. That is to say, if you're familiar with output of the group's label Service (which includes compatriots The Embassy, The Tough Alliance and Studio) then it will come as no surprise that the first adjectives which spring to mind upon hearing are 'soft', 'dreamy', 'summery', 'bitter sweet', 'luscious', etc.

This preconception is encouraged furthermore by the album's artwork: a series of photographs depicting abandoned seaside scenarios, all blues skies and seas, apartments blocks of bright whites and pastels, all of which (in a move of typical Service-style mystery) have not a single soul in sight. Indeed, the sonic palette of Trust In Numbers evokes exquisitely the colours, textures and sense of space depicted in the artwork with its variably vaporous and aqueous synths, gentle gossamer guitars and spacious production.

If the summery artwork suggests that the album finds itself receiving rather an unseasonal release date, then this is mollified by the fact that much of Trust In Numbers is awash with a melancholy which (like The Embassy's Tacking which was reissued earlier this year) suggests a yearning for a time, or a romance perhaps, which has now passed. This is most evident on the gorgeous album closer 'Let It Die', where front man Janne Kask sings about a vague "something" which is... "like a house on fire, first it's there then it's gone, and it's not coming back again". However, 'Let It Die' is something of an anomaly in the way downbeat music mirrors the heartbroken sentiments of the lyrics.

More representative is 'Mystery', which opens the album at a brisk pace, with an insistent drum machine beat and delicately picked acoustic guitar which are enveloped in a chorus of ebbing synth washes and fidgeting electric guitar loops. Meanwhile frontman Janne Kask laments "When you think it's love love love, it all turns into history" and really opens up on the chorus, "You said that love would last, but it all went away so fast, and I thought that the hurt would pass, but it still keeps on coming back". However, Kask's vocal stylings are in keeping with the gently breezy feel of the music, choosing to bleed his heart in rather hushed tones. Musically, 'Pipe Dream' is like a less flamboyant Empire of the Sun, with Kask's soothing enunciation allowing the songs' hooks to sink in gradually and gently. When he does let loose a little he still has a pixie-like delicacy akin to fellow Scandinavian Jonas Bjerre of Mew. For the most part the bittersweet ache at the heart of Trust In the Numbers is evoked through music rather words. Thanks in part to the dreamy reverb-heavy production by Dan Lissvik (also responsible for production on Taken By Trees' East of Eden) Lake Heartbeat fashion a sound that is at once widescreen and restrained.

Due to the degree of restraint and uniformity throughout the album there is the danger that Trust In Numbers could become background listening, and the first few listens suggest no standout tracks. However, Lake Heartbeat have just enough variation within their template to keep things interesting without sacrificing cohesion. 'Solid Mass' begins with foreboding strings, a menacing mood which returns after each chorus in the form of tolling bells and gigantic booming toms, such that its grandeur sounds as indebted to Sixties chamber-pop and as Eighties synth-pop. The big toms make another appearance on the album's best out-and-out pop song 'Golden Chain', its tambourine, quickly strummed acoustic guitar and gorgeous cascading guitar melody perhaps what Camera Obscura would sound like if they successfully combined their Sixties-indebted guitar pop with their admiration for modern Swedish pop music. The oft-mentioned Balearic aspect of the classic Service sound is most present in the punchy synth-bass of 'Blue Planet' and the crisp programmed beats of penultimate track 'Between Dreams' where it serves to give a throbbing pulse to songs which might otherwise be overly luxuriant in their lush soundcapes. The snare march and trebly staccato piano section of 'Between Dreams' is particularly, and welcomingly, unexpected.

The photograph which adorns the album cover appears at first glance to be of a tropical beach scene, but on closer inspection turns out to be a mural on a wall, complete with a door in the middle, as if one could open it and step right into this summer idyll. Trust In Numbers' real strength lies in the fact that listening to it is like stepping through that doorway, and the fact that is does this so convincingly makes it a genuinely transportive listen, even with winter steadily encroaching