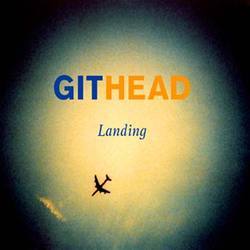 'landing' marks githead's third album (and fourth release) since their inception in 2004. in a short career that has boasted more five-star reviews than most bands have had hot dinners, landing' is, unquestionably, githead's most accomplished recording to date. for the uninitiated, githead are colin newman (wire), malka spigel and max franken (minimal compact) and robin rimbaud (aka scanner). however, who they are is far less important than what they are. and what they are is a band, rather than a collaboration between four individuals. githead has developed incrementally and organically : from the krautrock-infused roots of 2004's debut ep 'headgit', through an expansion in style and mood on first album 'profile' the following year, to the self-descriptive 'art pop' in 2007, which was critically hailed as the band's zenith. improbably, 'landing' goes one better. all the familiar components of githead's distinctive idiom remain in place - newman and rimbaud's minimalist guitar patterns, their supremely catchy melodic sense, spigel's propulsive bass rumble, franken's solid, steady drive - but 'landing' broadens the band's vocabulary considerably. adding depth, texture and shading, this album's ten tracks are somehow simultaneously harder, edgier, more expansive, more organic, and more hypnotic. crucially, though, while githead might now be speaking a more sophisticated, nuanced language, they never once lose touch with their essential pop sensibility. it's this unique balance of convention and subtle experimentation that's always distinguished githead from so many others attempting to plough the same adventurous avant-pop furrow.
description from www.roughtrade.com