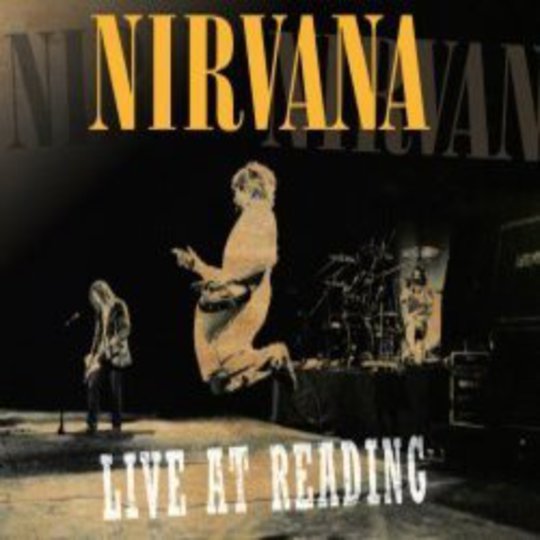 Nirvana's 1992 Reading headline slot is one with a place in rock mythology both definite and vague. Let's start with the definites, several of which are confirmed by the rather tardy issue of this DVD/CD package. It was definitely the last gig Nirvana ever played in the UK. Everett True definitely pushed a mock wheelchair-bound Kurt Cobain onto the stage. The gig definitely had some moments that could be described as on the sloppy side, but for all that it could definitely be described as a pretty triumphant affair.

Still, was it an 'important' gig? Many point to their 1991 set at the same festival as the better show; certainly Live at Reading lacks the sense of occasion of MTV Unplugged, while as a summary of their live career as an electric band, the 13-year-old From the Muddy Banks of the Wishkah isn’t harmed by being culled from multiple concerts. The whole would they/wouldn't they play drama certainly doesn’t come across as a big deal on the DVD; True's wheeling on of Cobain is over before it begins, a flippant joke that doesn't seem especially morbid, even in hindsight. For all the vaunted lack of rehearsal, the band are actually pretty tight, bar an intentionally ragged encore. Excised from the history books is some dude called Tony, a strange looking man possessed of what I can only conclude is a early Nineties haircut, dancing between Cobain and Krist Novoselic for the whole show, his presence unremarked upon until well over an hour in, when Cobain smirkingly notes that "he still writes all our songs". Listen to the CD and little of this is even apparent. It's a good gig, but I wonder if it isn’t a bigger deal to the British than to Nirvana-philes as a whole.

That taken into account, it’s actually the sense of not being a big deal that makes Live At Reading such a blast. The film stock is cheap, and the combination of the tiny early Nineties stage and the decision to shoot virtually nothing bar Cobain, Novoselic and Tony (i.e almost no crowd shots) gives the impression of a far more intimate show than was the case. Then we have the fact that while all of Nevermind bar ‘Something in the Way’ gets an airing, this is a 25 song set, without Butch Vig on hand to lacquer everything into oblivion. The best bits of Bleach and Incesticide buzz and growl freely amidst a bristling sea of roughed up Nevermind material, an early smattering of In Utero tracks (fully formed versions of ‘All Apologies’ and ‘Dumb’ suggesting a rather less visceral record than the one more faithfully pointed to by ‘Tourette’s’) and a couple of sludgy punk covers (Fang’s ‘The Money Will Roll Right In ‘ and Wipers’ ‘D-7’). It’s a satisfyingly vicious brew, an engaged, passionate performance, with the only indication of the band’s unease with success being a sardonic snatch of Boston’s ‘More Than A Feeling’ prior to ‘Smells Like Teen Spirit’ (rather grumpily left off the CD) and a mangled ‘Star Spangled Banner’ at the end, presumably an ironic Woodstock nod. It probably goes without saying that the songs are almost uniformly magnificent, but certainly the band seem as aware as anyone as to which bits of Bleach were the keepers.

So it’s good, but given the large amount of quality Nirvana concert stuff out there, does Live At Reading really have much by way of USP? Probably, yeah, if only because it's the band's sole full electric gig commercially available (bar the early one on the second disc of the Bleach reissue). It also offers an alternate take on Nevermind for those who can do without the claggy production. It looks and sounds intimate and punk rock, and there’s no undue flattering of Dead Icon Kurt Cobain. Above all it’s a good concert of mostly exceptional songs.

Still, calling Live At Reading essential in the greater scheme of Nirvana releases is pushing it; it’s notable that Cobain only chose one excerpt (‘Lithium’) for the project that became Live! Tonight! Sold Out!!. There are those who are just going to enjoy gawping at said Dead Icon, but the whole thing is shot in so no-frills a fashion that I found myself switching to the CD the second time around. Here, I’ve got to gripe that the cuts made to accommodate everything on one disc renders it somewhat impersonal: no ‘More Than A Feeling’, very little banter, an excessively terse pace that takes away some of the concert ‘feel’; maybe splitting it over two CDs would have been excessive, but certainly it’s a lot less personable than MTV Unplugged as a result. It is also, pretty undeniably, a pre-Christmas cash in.

But take that on board and you’re golden. This isn’t the stuff of myth or legend; it’s three great musicians playing some wonderful songs, as yet untouched by the shadow of death.