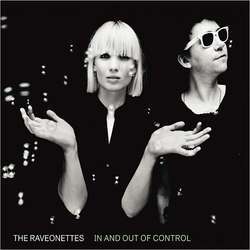 The Raveonettes - In and Out of Control

The Raveonettes won't change. This is their thing, their schtick. And for the most part, bending phil Spector out of shape and dragging him by his shock of hair through a raft of distortional devices and all the while kicking the hell out of the ‘Leader of the Pack’ is a very good thing. »

the raveonettes still very much consist of sune rose wagner and sharin foo, both danish-born and now residents in new york and los angeles respectively. 'in and out of control' is their fourth album. it features eleven brand new songs, lasts for 37 minutes and eleven seconds and was recorded in denmark in a proper studio with a top producer because - get this - the raveonettes wanted to make a pop record. last time we saw the raveonettes they were touring the highly acclaimed 'lust lust lust' album, released late in 2007 and the titanic twosome's first independent release after parting company with columbia. since then sharin has become a mother and the duo filled a hole with three download-only ep releases late last year. plenty of time for thinking, then..."we spent two years coming up with the sound and songs for 'lust lust lust' which was recorded in my apartment in nyc and was the darkest record we ever made," recalls sune. "we always hated repeating ourselves so we set the bar really high for 'in and out of control". so back to denmark they went to spend three gruelling months writing, recording and mixing the entire album with one thomas troelson, whose previous production credits include junior senior and dfa. there is talk of exhausting 15 hour sessions in the studio with the duo trying to figure out what they wanted the album to sound like. even when it was finished sune was unsure exactly what it was they had made. then again, sonic alchemists out there may care to note that as the aforementioned download-only eps of 2008 consisted of four classic rock 'n' roll songs, four christmas-themed tunes and four electronic creations perhaps it is unsurprising that the raveonettes, forever seeking new melodic horizons, should get themselves so bewilderfuddled. whatever the madness in their methods the end result is startlingly clear: 'in and out of control' is a wilfully perverse and heroically diverse collection of pop nuggets which delivers a slew of soon-to-be raveonettes classics. and 'pop' is once again the key word here, as the lush production at times harks back to the early '80s when trevor horn sprinkled sugary sonic sweetness over everything he touched. it isn't alone either, as the giddy opener 'bang!' and the frankly terrific 'breaking into cars' take the raveonettes' penchant for three minute thrillers up to a whole new level. true, it's unlikely that many of mr horn's pet pop projects would make lyrical reference to 'every time you overdose,' or 'i rush to intensive care'. nor indeed would they have song titles like 'suicide', 'd.r.u.g.s.' and 'boys who rape (should be destroyed)'. but this is where we find the raveonettes in 2009, creating 'a strange mix of modern and old, dark and happy,' according to sune. "it's about rape, violence, lost love, suicide, not giving a shit about what other people think of you and most importantly being mad and angelic." long term ravers can rest assured therefore that the duo's creative heart remains as delightfully black as ever, as evinced by the solemn ambience of 'oh, i buried you today' and weary album closer 'wine'. and if anyone was thinking that the raveonettes have abandoned their scuzzed-up crown to the new generation of pains of being crystal girls on the retro block then the coolly berserk 'break up girls' will teach a few of those marychaining young tykes a thing or two about a feedback blitzkrieg.
description from www.roughtrade.com