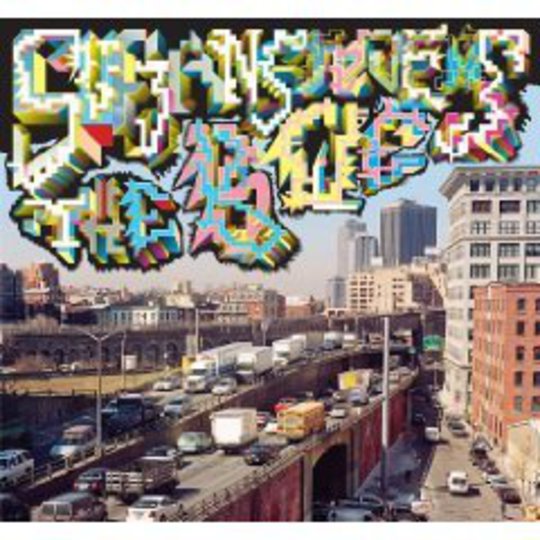 Perhaps the best place to begin with the new Sufjan Stevens album is to state that it’s not the new Sufjan Stevens album. Not really. For starters, it’s less an album, more the soundtrack to a film and musical suite inspired by the Brooklyn-Queens Expressway. It’s not new either – its live incarnation was premiered almost exactly two years ago in New York, replete with orchestra, film footage and, brilliantly, hula hooper ‘heroes’ (subject of the Stevens-penned accompanying comic book). Emphatically, clearly, it’s not the new Illinois – a fact that seems to have put as many people’s backs up as it has simply left a bit confused (it’s best not to bring up the forthcoming Run Rabbit Run with these people).

It is a little confusing. It’s about a road. It’s got song (‘movement’) titles like ‘Linear Tableau with Intersecting Surprise’, ‘Isorhythmic Night Dance with Interchanges’ and ‘(Finale) The Emperor of Centrifuge’. It’s… about a road. But it’s also unmistakeably the work of Sufjan Stevens, and a worthy achievement if nothing else.

Given his recent, well-documented doubts regarding the music industry – and where he, himself, fits in the bigger picture – it’s a welcome reminder of his weighty talent and ambition. And heck, it’s an interesting and enjoyable listen too. Faint praise? Damning? That’s open to interpretation, but the fact remains: it’s a document of a one-off, a multifaceted experience intended for grand performance halls rather than MP3 headphones, and it inevitably suffers by comparison.

Take The BQE on its own terms and there’s plenty to enjoy. It twinkles and soars, ducks and dives with the kind of confident orchestration that laced Illinois without ever weighing it down. ‘Introductory Fanfare for the Hooper Heroes’ is stirring, to say the least: timpanis rumble, brass instruments boom and the woodwind set flutter and spin, before a bright, gentle melody tiptoes from the melee. Hereon in the listener is subject to Stevens’ lush re-imagining of the history and day-to-day use of the BQE – a sweeping fantasia in turn virtuosic, opulent and quietly affecting.

That Stevens draws inspiration from said expressway shouldn’t really come as too much of a surprise, either. Cities don’t come much more idealised, vast or documented than New York, and the BQE is here viewed as a monument to America’s ‘Golden Age’ – a post-war boom where such civic projects had all the misguided intent to “basically save society and save mankind”. Ultimately a poorly designed and generally disdained 12.7 miles of elevated tarmac, its inherent failures are the result of well-meaning ambition that neatly parallels Stevens’ own (rather more successful) artistic endeavours.

Much of the romance, wonder and whimsy that marks his best material is present and correct, albeit manifested in notably different style. There are musical treats scattered throughout, from the lullaby introduction of ‘(Finale)…’ to the plaintive piano strokes of ‘Postlude: Critical Mass’, and even a glimpse of where he might be headed via the skittering electronic meld of ‘Traffic Shock’. Though it’s almost impossible to separate the record into constituent elements (it is a suite after all, citing Wagner and Gershwin among its influences), ‘…Shock’ makes for a standalone highlight: a crystal maze of recycled melodies, squelches, beeps and whirs that manages to both a) not feel at all incongruous and b) up the ante considerably. Meanwhile, ‘Sleeping Invader’ deftly builds from a dreamy, waltz-like introduction into free-jazz flurry, while ‘Dream Sequence in Subi Circumnavigation’ starts out all brooding somnambulance before winding its way to sweet cacophony.

It’s good, then. Great, in places. As far as curios go, The BQE comprises 40 minutes of transportive, exquisitely played instrumentation, testament to Stevens’ perennially curious nature. While all eyes might be on that elusive new album proper, it’s worth bearing in mind that (via an assumed period of introspection) he’ll no doubt return in 2010 with just about the last thing you’d expect, à la Radiohead this decade.

Pioneers, innit. See you then.