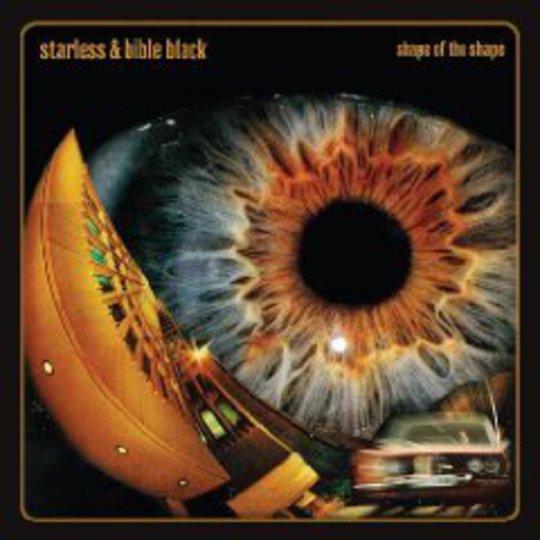 There's a King Crimson album called Starless and Bible Black, but this Manchester-based group say that's not their inspiration: it's in fact a 1965 track by jazz pianist Stan Tracey with the same name. That's not easy to believe judging by this record: second full-length Shape of the Shape involves no piano, lots of prog signifiers, and jazz in only the broad sense that includes lounge music (so, not very jazzy jazz). Lounge acts frequently hire vaguely exotic European singers, so Starless and Bible Black have a French lady who we could luxuriously refer to as a chanteuse - Hélène Gautier. But French female singers aren't always as gorgeous-sounding as the word used to describe them, and Gautier's unremarkable voice can do little to save a record mired in impeccable mediocrity.

To briefly give it some due, Shape of the Shape is lovingly produced, every pluck of a guitar string resonating in full, every gap between sounds given time to breathe. If your dad is like my dad -- caring more about the precision and clarity of the sound reproduced through his high-end speakers than about the melodies or rhythms or whatevers of the actual composition - well, Christmas is just around the corner and Shape of the Shape has a real warmth of sound. And there are a few lovely moments, such as when an angelic chorus revitalises fourth song 'Radio Blues' as it drifts towards its close by entering really high, in contrast with the low descending bassline.

But those moments get very lonely. Everything on Shape of the Shape is mid-tempo. Mid-tempo's fine, it's necessary, but like a referee, when you notice it it's a problem. Every song features at least one instance of the UFO synth effect, landing or taking-off or swooshing across the sky, like they do. Fine, sometimes. Nearly every song starts with the slow strum of an acoustic guitar, giving the whole record a grounding in folk. Of course, that's OK, in theory. Gautier's voice is high and weedy, she hits the notes, has little character. For the most part, trying to transcribe her lyrics is like trying to transcribe Liz Fraser, because she sometimes sings in French, and sometimes just poorly enunciates. The successes aren't encouraging: "Hold me down now my mind is open / tell me how many hearts are broken / how to see family tree, treasured, lost in history." Add meaningless mush to indecipherable yawning and the vocals are clearly not a strong point. But it's hard to know what might be a strength here, production apart. There are no hooks, no memorable tunes. There's no rollicking rhythmic excitement, no dynamic shifts, no climaxes, no purges. No one-liners, no discernible stories, no themes. No risks taken, no happy accidents occuring, no disasters, no distastefulness, no surprises. Shape of the Shape is bland and instantly forgettable.

One song breaks the mould a little, the nine-minute album centrepiece 'Les Furies', which achieves a kinetic energy we might be able to describe as 'upper mid-tempo'. After three whole minutes of stereo-weaving buzz effects - like having your head shaved with different-sized clippers mowing tangled patterns - 'Les Furies' gains a chugging guitarist and a drummer with a sense of urgency. His flailing fills and rolls towards the end are the only passages where Shape of the Shape rises out of its dreamy inertia.

Vocals aside, Shape of the Shape is a good articulation of how I imagined Emerson, Lake & Palmer might sound in their quieter moments, though I'd never actually listened to them. On Spotify, I found 'From The Beginning', which pretty much nails this album in four minutes. It's what prog became after its first flurries of invention - complacent, conservative, self-satisfied, cliched - not 'progressive' at all. It's sometimes hard to condemn an album as inoffensive as Shape of the Shape, but nobody is a music fan because they love competence.