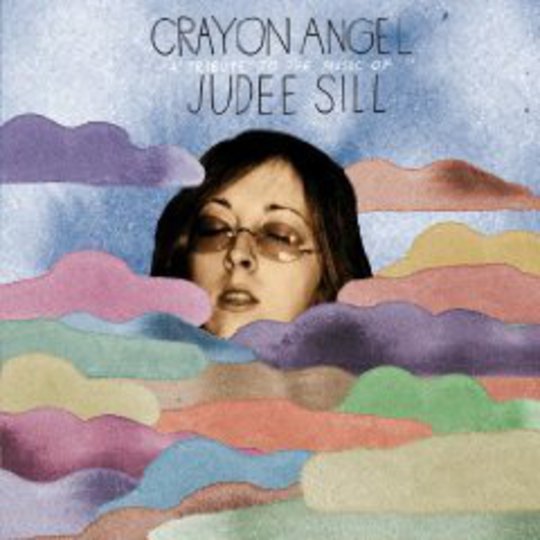 Anyone on the ground floor for the career of Judee Sill, which effectively lasted for about two years in the early Seventies, would have probably assumed that her two albums were destined to be passed-over bargain-bin staples, along with the vast amount of grandly produced MOR folk-rock spawned in that part of the century. Not so. Sill died of an overdose in 1979, having hopped back on the narcotics she previously kicked to attempt a songwriting career, but in her absence her reputation mushroomed; original pressings of Judee Sill and Heart Food are collector gold, and her status as a kind of cult singer-songwriter’s cult singer-songwriter is lent weight by Crayon Angel, a 15-track tribute CD with some of the most lauded voices in indie, folk and indeed indie-folk.

Backed by a label clearly hoping for Sill to emulate the success of Joni Mitchell and Carole King, the pigeonhole of ‘accessible solo lady’ was pretty inevitable, but there’s not much in her music or lyrics that could be deemed innately feminine. As such, the fact that men and women are represented on Crayon Angel in pretty equal measure makes sense. Canadian pop-folk troubadour Ron Sexsmith, to my knowledge, has never raised his game above ‘alright if you like that sort of thing’, and his conciliatory pleasantness does not render ‘Crayon Angel’ (the song, probably Sill’s best known; apparently Fleet Foxes cover it live on the regular) a lead-off track to make you expect imminent wonder.

Other chaps enlisted here splash about a bit more colour, however. Leaving aside the issue of whether Owen Pallett’s micro-orchestral romantic giddiness strikes you as gruesomely gauche affectation or not, Final Fantasy is really the kind of act that a tribute album of this nature should be hitting up for contributions. ‘The Donor’, in Pallett’s hands, strikes a tidy balance between keen reprogramming and earnest tribute, bowled along by clusters of vaguely jazzy keys. From a slightly muddier position in the corridors of ‘leftfield rock’, we have Colossal Yes, which is basically Comets On Fire pretending to be a Seventies AOR band – as such, pretty emblematic of this compilation’s spirit, or what I’m gleaning from it. ‘The Phoenix’ is a bit like a pissed-up Bob Seger and gets points for embracing foolishness whilst sidestepping irony.

On this compilation, as it goes, the ladies tend to be more ambitious in their reimaginings of these songs, the originals of which can simultaneously feel skeletal and intimate, grandiose and blown-out. Frida Hyvönen palls somewhat over the course of a whole album, but is fairly successful when laying down a single track – ‘Jesus was a Crossmaker’, which she has in fact rearranged herself. It has a nice ‘singing in the centre of a huge ballroom’ vocal effect and an endearingly curtailed attempt at a large, multi-voice chorus . Portland-based reverb enthusiast Marissa Nadler’s crack at ‘The Kiss’ in fact owes much of its sound, based around a minimal synth backing, to cohort Myles Baer. It’s a curveball, but you suspect this would have been better played with a straight bat – it certainly doesn’t compete with the original, which sounds somewhat like the prototype for Plush. In a similarly minor upset of the applecart, Meg Baird of Espers has her typically lush vocal supplemented with naught but a pair of trombones for a winningly hymnal take on ‘When The Bridegroom Comes’.

Judee Sill fans may well be less interested in the lineup of tribute-payers than the fact that two songs within are not only unreleased but unrecorded – the sheet music has survived and is used here. Beth Orton tackles the first of these, ‘Reach For The Sky’, in a piano-heavy fashion that’s glossier than her average, fairly glossy compositions. Her semi-raspy voice sounds, on a couple of occasions, like it’s considering an attempt at soul singer-style melisma, which it really doesn’t suit. Better results are delivered by Bill Callahan, aka Smog, who has been handed ‘For A Rainbow’; he, too, leans on the piano for the song’s musical skeleton, but the result of this, quite reasonably, is that it effectively sounds like a ‘standard’ Callahan-penned song, albeit one that lasts eight and a half minutes.

Indeed, these two songs are probably the most persuasive argument for this tribute album’s existence. The second most persuasive – that several covers here are well-worked and worth hearing – is certainly relevant too, but assuming you’re not an obsessive fan of one of Crayon Angel’s featured acts, you should get the marvellous Heart Food post-haste, then the debut, then have a think about this.