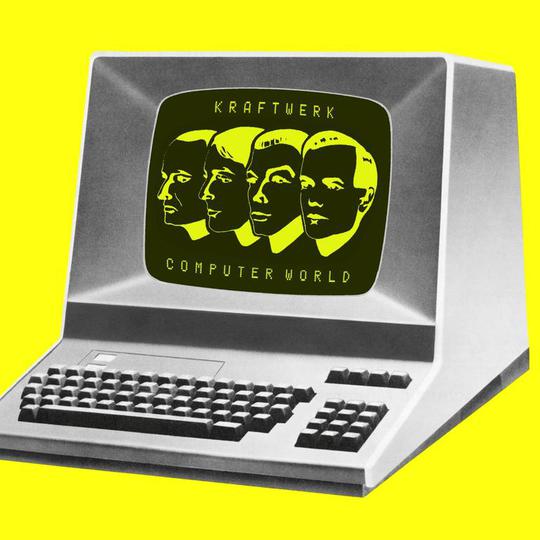 “We live in a computerworld, so we are making a song about it.” With typically obscure candour, Ralf Hütter chose these words to explain the impetus behind Kraftwerk’s 1981 album Computer World. Their last great album, it is also perhaps their most prescient and, at just 33 minutes, the most efficiently pared down conceptual statement in their catalogue.

Although ‘Planet Rock’ remained a year away, the increasing affordability of synthesisers and drum machines meant that Computer World marks the point at which Kraftwerk’s influence was beginning to become literally audible across a whole swathe of popular music, particularly in the cresting wave of synthpop and New Romantic acts. While Kraftwerk would soon become fazed by this challenge to their technological superiority, at this moment in time they gracefully rose above their competitors and idolaters with a breathtaking sequence of dystopian robo-funk rhythms and their most touching electronic love song to date.

The thrumming pulse of ‘Computer World’, its three-note melody glancing like sunlight from its delicate breakbeats, houses one of Hütter’s most insightful lyrics. Reeling off a list of governmental and financial institutions – "Interpol and Deutsche Bank/FBI and Scotland Yard" – a synthetic voice provides the counterpoint of "Business, numbers, money, people". With supreme economy the song charts the privacy-threatening interconnectedness of our modern world; one the incipience of which was far from blindingly obvious in 1981. The German-language version of the track contains extra lines which are even more explicit about government data collection.

Flipping from warning to celebration, ‘Pocket Calculator’ is a tightly wound piece of geek-funk that, in best musique concrète manner, slots sounds from Texas and Casio calculators into its highly regimented groove. Driven by bass that resembles less of a line than a shower of blurts and bumps, it’s easy to imagine Devo angularly nerding-out to this (hell, even the infamously motionless Germans – Florian aside – cut loose to it right here.

On the prophetic button once again, Hütter’s line "By pressing down a special key/It plays a little melody" forecasts the availability of technology that would see the term ‘bedroom producer’ join the lexicon. The music is similarly forward-thinking. Listen to the instrumental passage lasting from 2:50 to 4:00 and you can hear atonal synth stabs that resemble late-Eighties bleep techno, pre-echoes of the micro-edited funk and disco samples that would fuel house, and the alien melodies that would fire the imaginations of the Belleville Three.

Some doubts hang over the new edition’s remastering of ‘Pocket Calculator’ in that the bass occasionally seems to flatten beats it should properly be making way for. No such concerns affect ‘Numbers’, however, which now sounds even more like it’s been beamed from some deeply ambiguous future civilisation whose sole aim is to seriously fuck with your head. A skip-rope song for terminators and replicants, the track cycles through one to eight in German, English, French, Spanish, Russian and Japanese, while its bone-shaking aluminium-sheet beat – the one that would soon be providing ‘Planet Rock’ with its awesome thrust - bowls on into ‘Computer World 2’. Here the melody of ‘Computer World’ is reprised, softening the harshness of ‘Numbers’ and yet again invoking the sense of trance that veins Kraftwerk’s body of work.

This compelling opening triad fades away only for one of Kraftwerk’s greatest and most moving tracks, ‘Computer Love’, to shimmer into being. Chris Martin apparently wrote a personal letter to Hütter and Florian Schneider asking for permission to use the melody for ‘Talk’, and it’s plain to see why: it’s a sublime mixture of the hip-grabbing and tear-jerking. Lyrically, "Another lonely night/ Stare at the TV screen/I don't know what to do/I need a rendezvous" must rank as the emotionally rawest stanza Kraftwerk ever sang (not a particularly tough category in which to dominate, admittedly), and it’s one that adds further depth to the band’s investigations into the complex links forming between humanity and the technology it has created.

Even more than that instrumental break on ‘Pocket Calculator’ mentioned above, ‘Home Computer’ predicts the future course of techno. Ushered in by a sequence of digital croaks that are most likely an early sample (of a Texas Instruments Speak & Spell), a vicious bass thud underpins a minor-key melody of the sort that would come to billow like strobe-pierced smoke through the music of Detroit later in the decade. By the track’s end its menacing rumble has broken out into miniature sequences of digital chatter and bleeped-out oscillations that lay the ground for 'It’s More Fun to Compute''s darkside electronic stomp. Gaseous synth work puffs and churns around a cyclical, respiratory beat, the track’s claustrophobic atmosphere an instrumental reiteration of the album’s cautionary themes.

A work of immaculate brightness that's nevertheless in possession of dark tugging undercurrents, Computer World inspires political and social contemplation even in the midst of throwing your hands in the air. It's the last node in a sequence of three immensely important Kraftwerk albums, a trilogy possessed of tremendous focus and bravura confidence. The ideas contained in Trans-Europe Express, The Man-Machine and Computer Love remain fertile, despite the extent to which this soil has been tilled in the past 30 years. But time was nevertheless up for Kraftwerk in the sense of forging ahead into a previously undreamt of future. As with the cautionary predictions articulated by ‘Computer World’, doubt and uncertainty lay just around the corner.