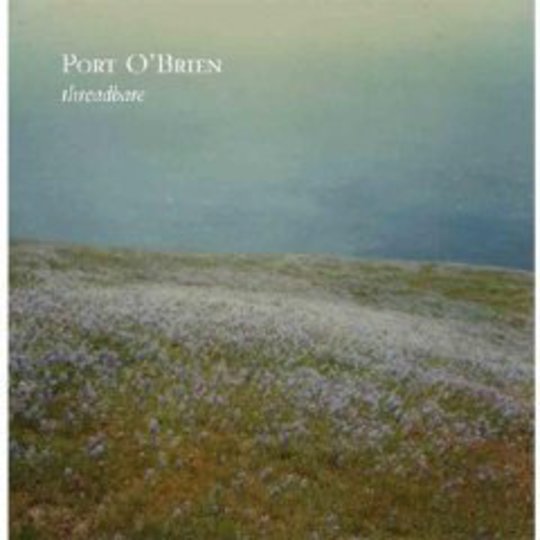 Deep into the promotional cycle for All We Could Do Was Sing last summer, Port O’Brien played a show in East London with the similarly buzzed-about Dodos. I stumbled in only to catch the closing minutes of their set, as Van Pierszalowski stalked the stage in wild-eyed manner, gleefully inciting the crowd to scream along with him. threadbare finds the band deftly change tack, substituting said bravado for dreamy, bereavement-informed reverie. The results are as fascinating as they are occasionally uneven, on a record that warms and chills with profoundly magnanimous intent.

It’s Cambria Goodwin rather than Pierszalowski who steers this ship, her ethereal vocal turns drifting in and out of comprehension with simple, affecting grace. She lost her younger brother during the formative stages of the album’s development, a tragic occurrence that impacted deeply on what followed. Yet threadbare isn’t an overtly somber work; even as it negotiates its most melancholic waters, it shimmers with an odd sense of hope and liberation. The latest incarnation of ‘Tree Bones’ is a case in point: a loose acoustic strum that snaps into purposeful life somewhere around its mid-point, Pierszalowski’s distinctive pipes propping up Goodwin’s as the instrumentation circles and swells ever more expansively around them. It’s a beautiful contemplation of natural cycles, life, death and ensuing grief, its strings eventually ceding so that only Goodwin’s brittle vocal and a barely audible guitar line remain.

The emblematic title track is similarly effective, though slighter in its approach. It’s arguably moments such as these – the unhurried, woozy odes to inevitability – that resonate the strongest. A sense of darkness is, literally, impending throughout: “dark will always come” rues Goodwin here, before the motif is picked up again via ‘(((Darkness Visible)))’, which plays out like weary resignation – an acceptance – more than anything else. “Oh my friend…what a summer it’s been / But now it’s time for healing” offers her bandmate on the following ‘Love Me Through’, a sweet, sprightly strum if ever there was one.

Port O’Brien sound less willfully ramshackle and roomier than before, a happening in which Jason Quever no doubt played his part, having already gifted 2009 with one of its most atmospheric (and woefully overlooked) offerings with his third album as Papercuts, You Can Have What You Want. threadbare’s more reflective half was recorded at his home studio in San Francisco, before finishing up its more buoyant side in Los Angeles. Not that this is a work of opposing halves, though the odd misstep is apparent – album centrepiece ‘Calm Me Down’ does feel a little simplistic in light of the quality on display elsewhere, while on the more upbeat tracks the ghosts of Grandaddy, Arcade Fire and Modest Mouse can all be felt to varying degrees. Not that this is a bad thing – and ‘Leap Year’ is a whole heap of fun – it’s just that most of the album sees Port O’Brien defiantly come into their own, and alongside its more introspective elements, numbers such as this can’t help but feel feel a touch incongruous.

These flaws don’t detract from the record unduly however – and after all, the band needs something to have fun with in their uproarious live show. Though there’s nothing here as outright celebratory as ‘I Woke Up Today’, perhaps that’s to be expected. Bookended by the fragmented, self-explanatory ‘High Without The Hope’, threadbare’s generous, circular nature is to be applauded; it’s rare that studies of loss are as authentically moving and sensitively played as this – and even rarer they’re so completely endearing.