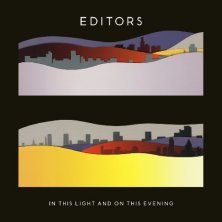 Editors - In This Light And On This Evening

Despite being the butt of many indie elitist's vitriol, Editors can rest assured in the knowledge that their commercial success over the past five years provides ample justification to stick two fingers up at their detractors...»

heavyweight vinyl. 'in this light and on this evening', the new album from editors, represents a significant step forward for the band following the huge successes of debut album'the back room' and the number 1 follow up 'an end has a start'. there have been many changes to life in editors since an end has a start broke the band worldwide and established the then birmingham-based four piece as one of the uk's most prominent bands of recent times. bassist russell leech and guitarist chris urbanowicz are now resident in new york while singer tom smith has become a father. these changes added to the sense that 'in this light and on this evening' is the start of a new chapter for editors and the band came together in london for the recording sessions with producer flood at the start of 2009 with a determination to push their sound into wholly new territory.
description from www.roughtrade.com