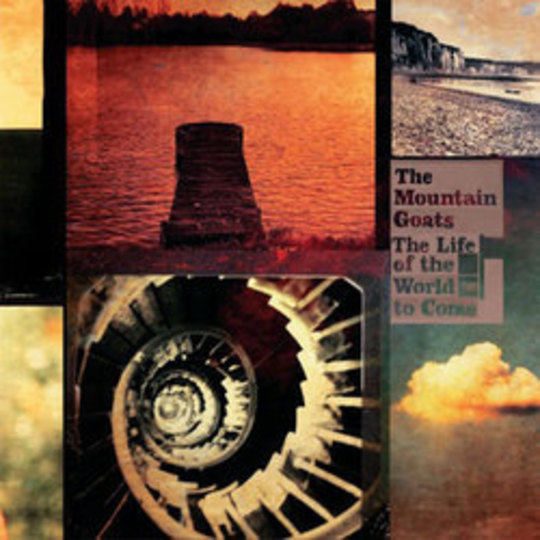 “I won't get better, but someday I'll be free / 'Cause I am not this body that imprisons me”.

It seems to be an album about death.

More specifically, it seems to be an album about how the notion of ever being prepared for death – for your own, for that of a loved one or simply for the concept, if calling death a 'concept' doesn't seem insensitive somehow – is laughable, pathetic, even pitiful.

Each pared track of The Life of the World to Come, The Mountain Goats' 16th – released – album (with vocalist/writer John Darnielle and bassist Peter Hughes joined by Jon Wurster on drums and perc), is named after a book from the Old or New Testament, but to look for any correlation between the songs' imagined intentions and those scriptures would be a tedious approach to deciphering either; besides, the record itself seems to be about the very impossibility of taking any biblical or otherwise faith-based tract as read, because ideas of faith and belief are, themselves, inscrutable.

'Inscrutable' because Darnielle's lyrics are as true as ever to his incisive yet confused style; 'confused' because, as his myopic cleverness makes for phrases as bracing and direct as can be, his words always – simultaneously – obfuscate or complicate themselves.

Take 'Psalms 40:2'. Amid its furious tempo, whoever Darnielle is speak-singing about appears to be in a building of worship that is ablaze with “all the rainbow's heavy tones”, “light cascading” through stained glass – but a first interpretation of this powerful image as optimistic is dashed when Darnielle snarls that the protagonist and his company “left that place in ruin, drunk on the spirit and high on the fumes”, the knowingly contrary use of the word 'spirit' in this context creating all sorts of backtracks and re-assessments. “Each morning new,” he later sings, then parries: “Each day shot through...with all the sharp small shards of shrapnel that seem to burst out of me and you”. Is this a scene of ascension – “He has raised me from the pit and set me high” – or of destruction? Again, we remain unable to reconcile the first impression with the second.

It is difficult to name another lyricist as apparently decisive and yet as audibly unconvinced by his own statements as Darnielle; his ability to describe the vapour of something and yet sound as startled as we are by his own accurate dissection is the most engaging aspect of his songwriting. He mixes a surface simplicity with an entrenched sarcasm; “Nice people said he had gone home to God now,” he coos during 'Philippians 3:20-21', and the condescension, the scepticism of 'nice', is registered with a short delay, like salt in a wound. “If you will believe with your heart and confess with your lips,” he simpers through the chorus of 'Romans 10:9', “Surely you will be safe one day”. 'Yeah, whatever', he silently responds.

Despite everything, there is a dash of hope here – of a sort – and there is a brief suggestion that while we may recognise 'belief' as a flawed, improbable thing, we are still governed by it on some integral level: “I remember seeing you, my tongue struck dumb,” goes 'Genesis 30:3', marking tentative steps above muffled piano, “Sounds kind of dumb when I say it, but it's true: I would do anything for you.” Overall, though, this collection is mired in the cobwebbed past; in “an awful room...that no one will sleep in again”, in empty streets once personally mapped but now meaningless (“I used to live here!” he repeats, appalled and abject, throughout 'Genesis') and in the jaded cataloguing of things that are about to be extinguished (“Look hard at my stripes; there will be no more after me”).

Perhaps the most unbearable of all these diary notes – because, religious or no, they do feel like confessions – is 'Matthew 25:21', in which Darnielle's character races to visit a friend or relative dying of cancer. “I'm an eighteen-wheeler headed down the Interstate, and my brakes are gonna give and I won't know 'til it's too late,” he bleats. “Tires screaming when I lose control; try not to hurt too many people when I roll”. The metaphor is obvious – he is the truck, spooling directionless through an intoxicating grief – but fuck, the metaphor hurts more for its obviousness. “I hope we're all in crash position when we hit,” he chokes.

'But', the silence seems to reply, 'we won't be'. Because where, say, 2008's Heretic Pride was rhythmically and melodically buoyant, The Life of the World to Come is begrudgingly static – while there is certainly an anger, a desperation, here, it is systematically quelled by Darnielle's refusal to rail against something that he knows is inevitable. (At times, it does share a similar pace to Heretic Pride – the trademark phlegm-fought gallop of 'Psalms 40:2' matches 'Sax Rohmer #1' almost beat-for-beat – but the initial surge of energy soon subsides, and Darnielle rapidly appears subdued beneath the presence of something bigger than himself, the stars above “like teeth in the mouth of a shark”). And where, say, Tallahassee (2002) was virulent in its bloodshot, spit-spattered rage, Life of the World to Come has acknowledged that that rage, however legitimate, has no ultimate direction; that what will happen will happen, and that, despite our best and varied efforts, we will never be ready for it.

“I then came to your bedside,” 'Matthew' concludes. “And as though speaking through a thick haze, you said 'hello' to me. We all stood there around you, happy to hear you speak... You were a presence full of light upon this earth, and I am a witness to your life and to its worth.

"It's three days later when I get the call, and there's nobody around to break my fall.”

Oh – there are just too many lines.