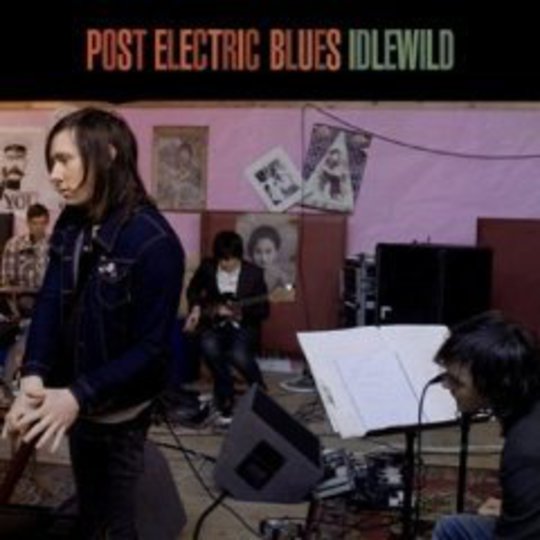 Having found themselves an unsigned band in the wake of their label Sanctuary going into administration, Idlewild took the decision to fund their latest album by asking their fans to pre-order the album. These generous souls received their copies of Post Electric Blues way back in June. While the method of release might have been a venture into the unknown for Idlewild, the musical direction of their new album is not. Instead this is Idlewild refreshed and re-energised: confidence back in place, rock-or-folk? identity crises left by wayside.

Nowhere is this more evident than on album opener 'Younger Than America', the very title of which tells you we're in the familiar territory of Roddy Woomble's long term fascination with the States. Heralding its arrival with a classic rock lick à la US tourmates Pearl Jam, the verses display the kind of vaguely folky melodic rock that has seen comparisons so often drawn with R.E.M, yet it sounds like classic Idlewild. Also, despite the American influences the chorus is given a distinctly celtic-flavoured bombast, courtesy of tasteful violin by Woomble cohort John McCusker and backing vocals from Irish folk singer Heidi Talbot. Her contribution in particular provides one of the album's more unexpected moments of beauty as the song changes key dramatically in the final chorus.

Woomble joked on his online diary that despite a sudden increase in his interest in America, that the album would probably end up being about 'mountains and islands'. The latter are certainly present on album centre-piece 'Take Me Back to the Islands' which also features McCusker and Talbot. McCusker's violin beautifully shadows the vocal melody over the spritely piano motif; along with Talbot's backing vocals it gives the chorus of "And the world will always seem so much younger than me when I take the boat out/A crowded world will always seem emptier to me when I take the boat out" a gently anthemic pull. When Woomble and Talbot duet on the lines "How come you always seem so real divine?/ You put your hand in my hand make it my design", it's clear the song is a paen to the Hebridean life that Woomble shares with wife Ailidh Lennon (of Sons and Daughters) on the island of Mull.

This isn't all about Woomble and his folky friends though. The majority of the album sees Idlewild sounding their most confident and comfortable since The Remote Part. In 'Readers and Writers' they have a stupendously glorious blend of bold brass, hook-laden guitar riffs, glockenspiels and stomping military drums; undoubtedly amongst the best singles they've ever released. The pretty campfire sing-along '(The Night Will) Bring You Back To Life', a duet with Rod Jones, is more typical of Woomble's solo work in style, but sounds like the work of musicians equally as happy producing pretty indie-folk ditties as they are rocking out. Speaking of which... if you are one of those fans who stopped caring about Idlewild when The Remote Part came out and yearn for the visceral thrills of 'Last Night I Missed All the Fireworks' and '4 People Do Good', then you will be disappointed. On the more obviously 'rock' numbers Post Electric Blues is loud, often expansive, always melodic, and owing to the backing vocals, usually anthemic in nature; a return to the days of guttural screaming and rolling on the floor wrapped in a microphone cable this is not. However, 'City Hall' is polished pop-rock of the finest order, with the repetitive chorus of "Could I succumb" memorable despite being typically opaque in the lyrics department. The title track stands out for its fried blues-rock guitars, but even so it features a pleasant sing along chorus.

If there's one obvious criticism of the album it's that some of it just sounds a little too middle-of-the-road. Certainly this is an accusation which could be thrown at the folkier tracks, but it's really a couple of the more melodic rock songs on the album's second half, which let Idlewild down somewhat. The brisk pace of 'All Over the Town' is initially exciting, but is melodically and sonically uninspiring, while 'To Be Forgotten' is appropriately titled. These two tracks threaten to ruin the album's momentum and make it look a little front loaded. Thankfully, the aqueous guitars of 'Circles In Stars' and the stirring and stately album closer 'Take Me Back In Time' redress the balance somewhat.

Post Electric Blues is by no stretch of the imagination a revelation; there are very few surprises to be found. Perhaps performing all their albums in their entirety last year afforded Idlewild a greater perspective of their back catalogue, because this is the sound of a band who now recognise their strengths and know how to play to them. For a band whose frequent line-up changes repeatedly threaten to leave them at an impasse, Post Electric Blues is a testament to Idlewild's stylistic and thematic consistency, while standing head and shoulders above the two albums which preceded it, if not quite equalling their career highs.