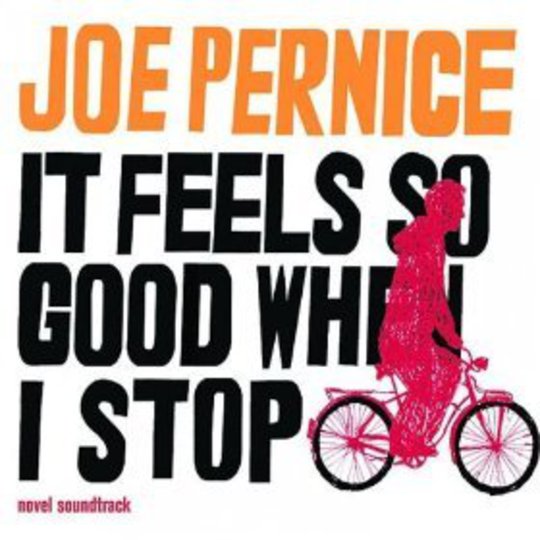 As a musician, Joe Pernice (of The Pernice Brothers) has a quiet respectability, whether for his work with Scud Mountain Boys, The Pernice Brothers, or solo, over the past decade-and-then-some. As an author, Pernice cut his teeth with a critically acclaimed response to The Smiths’ Meat Is Murder for the 33 1/3 series (…of writings about classic albums, FYI visiting aliens). It Feels So Good When I Stop, however, is his first novel-proper, paired with a (separately released) 'soundtrack' of covers and excerpts.

Having traded on the fact his music was used in Fever Pitch, and Nick Hornby’s volunteered a cover-quote, it’s no surprise that the novel is a reflection on messing-up in love and life as a directionless twenty-something… but it’s a testament to Pernice’s ability that this connection can be forgotten so quickly. Plot-wise, It Feels So Good... flits between scenes from Our Hero’s relationship with The One, and the aftermath of their absurdly short marriage (licking his wounds in the Nowheresville that is Cape Cod). There’s some (strategic) confusion about what happened, to a) intrigue us, and b) make us weigh up how deserved Our Hero’s current limbo might be.

However personally significant this is to the author, the novel is set in 1996 – i.e. about five minutes before Pernice became a career musician – raising our hopes of greater authenticity. As it happens, the novel’s musical references aren’t as intrusive as High Fidelity, and predominantly focus on Seventies folk and AOR (as the choice of covers on the album does), with a smattering of Eighties and Nineties alternative rock… but more on the album, below. Without cherrypicking the funniest lines, this is how the teenage Hero sounds:

[I]t was Spring Fling Weekend, and she’d always wanted to see Terence Trent D’Arby. I told her I would have skipped seeing London Calling-era Clash to be with her as much as possible. She said she’d never ask me to do something like that.

And this is an older self:

I started thinking about the bellboy who’d carried Jocelyn’s backpack into our honeymoon suite. He looked younger than me. I tipped him five bucks. He said he and his retirement savings thanked me. There wasn’t a single c-nt hair of sarcasm in his voice.

I woke up in my shoes and clothes. The morning sky was the color of a gray polyester shirt. I got up and kept the moving blanket thrown over my shoulders like I was Crazy Horse. Certifiably Crazy Horse.

In short, it’s warts and all, with Pernice never letting a cheap joke or a flashy metaphor get in the way of realism (albeit middle-class, East Coast, college-educated realism). It’s a 'page-turner' in the sense that the writing flows, and it’s compelling in the sense that it’s someone else’s (very credible, very familiar) problems that don’t necessarily make you confront the worst things you’ve ever done / thought / neglected to do (which is a relief), nor why you don’t have a life as glamorous as anyone fictitious (also a relief). It’s also not pretentious or obscurantist – that reference to the Clash? Even if you don’t care about them, you know it’s a classic album, classic era. The line about the 'c-nt hair'? It’s one of the more original ones from a character talking exactly like any other young male, using 'f-cking' as punctuation.

Whatever your feelings about the advent of the 'bromance' and the increasingly formulaic nature of 'bittersweet indie romcoms' from Garden State to Away We Go, it’s inevitable this will face some cynicism, but the characters are more or less functional human beings getting-by, rather than ciphers for cute life-lessons or mouthpieces for poster-ready aphorisms. (Dead babies and feelgood movies don’t mix…) The only dubious character-sketch is a real-life musician whose role in the plot is questionable; in an effort not to reprise the metafictive cameo of Bruce Springsteen in High Fidelity (the movie), let alone Alice Cooper in Wayne’s World, Pernice fails to convey the humanity of 'he-who-shall-not-be-named”' (No Spoilers Here!). Unless he’s trying to tell us 'Hey, THAT guy moved on, and we all know how messed up he was…', well, it’s an ambiguous scene to say the least.

True, Pernice avoids any Big Issues (i.e. how the lives of the characters intersect with socio-political moments, making the reader feel more aware / involved / erudite, even if they’re essentially impotent / just another passive consumer). Basically, he taps into the (entirely valid) function of relationship literature – to offer some kind of examples for when you and your friends mess up, which may have far more impact on you than any number of literary novels, or hip albums. (7/10)

I had always thought of Del Shannon as being right down there with Pat Boone. Why? Because I didn’t know what the fuck I was talking about. [p. 132 / Track six on the album]

The hero of It Feels So Good When I Stop grew up with Peter Frampton (implicitly more important than London Calling-era Clash, judging by plot-developments). He also wears a (treasured) Teenage Fanclub T-shirt, and he’s young enough to think that only Kurt Cobain was able to redeem the cardigan as male fashionwear. So, given that his hero is (some of the way) 'down with the kids', is Pernice going to be able to convince us that Del Shannon has soul, and that Seventies rock can still speak to us?

Much of what can be said about the here-covered ‘Soul and Fire’ can be said about the album, and to some extent the book. See, it’s never been a favourite Sebadoh song, although it’s respectable enough as an indie classic. In covering it faithfully – indeed, in choosing it – Pernice inadvertently highlights the central flaw of IFSGWIS's accompanying album. Bubble & Scrape is a classic because it breaks up Lou Barlow’s three chord pop-by-numbers with sonic collages and endearingly amateurish punk (by Jason Loewenstein and Eric Gaffney), making it a great portrait of teenage angst, if not the whole damn world of (sensitive male) music fans.

There is no such contrast on this album, nor much of a sense for a distinctive or special musical moment. If Pernice thinks that growing-up means focusing on the maudlin and predictable, and writing songs with 'universal' images (‘Soul and Fire’ / ‘I Go to Pieces’ / ‘I’m Your Puppet’), then he hasn’t grasped the need for variety. Even when confined to short songs, the music has a rigidity of structure that’s wearying. Every song is a mid-tempo ballad, and every song’s riff seems to go JUH-JUHJUH, JUH-JUHJUH, juh-juhjuh, juh-juhjuh… One exception is ‘Chim Cheree’, which is a touching moment, even if you find the idea of an adult male singing a song from Mary Poppins kinda creepy). You’ll definitely want to get the book, before you think about the companion album… (5)