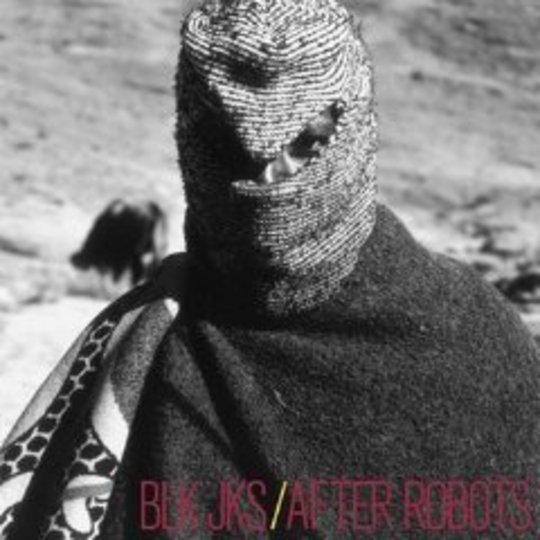 A lot has been spoken about BLK JKS. Too Much. Although the band formed in 2000, the last 12 months has seen the South African quartet receive what would probably approximate nine years worth of press coverage for the average indie band. It has been less an insight into the band and more the wizardry of the global PR machine, a machine that would label BLK JKS the African TV On The Radio. Even after one introductory listen to _After Robots_, this type of comparison seems wide of the mark.

And it's not like After Robots lets anyone down. It's a first class album from a fine South African export that, if the world was a little different, we may not have had the pleasure of knowing. But the problem (if you can call it that) with After Robots is that it might not be the album you're expecting. Yes, it's influenced by the psychedelic blues of Jimi Hendrix and the meandering prog-rock of Led Zeppelin, but this is an album charecterised by the smoldering climate and variegated culture on which it's bred. The industry may have tempted the band out of its homeland, but BKL JKS remain resoundingly South African.

There's only one familiar track from the pre-album swirl of 2008/9, the imperious 'Lakeside.' It's a good place to start, even though it sits in the middle of the record. Portentous _“oohs”_ overlay the sweltering blues riffs of guitarist Mpumi Mcata and the snapping snare attacks of drummer Tshepang Ramoba, while Linda Buthelezi – sounding not dissimilar to Josh Homme – ushers in the most important lyrics you'll hear this year: “Down by the lakeside / the paramedic threw his hands / to nurse a broken legion / but where did it all go wrong? / Happiness is near and happiness is here.”

If ever there was a single verse to describe the the hopelessness of the past and the optimism of the future. As soon as the lyrics break off, so the minor key changes, appropriately, to a major key and the cheers (and whistles) of joy send the song in a more hopeful direction. Although it seems like facile music critic methodology to attach a South African band to the South African past, there's the unmistakable feel of a turning page and a cause for celebration – it suffuses the record, just as the unrestrained and existential sense of freedom suffused the music of the Sixties and Jimi Hendrix, in particular.

The apocalyptic explosion of overdriven guitars and manic drumming that sees out 'Lakeside' and welcomes in 'Taxidermy' is illustrative of the album's many faces. Whereas 'Lakeside' follows the West's preference for verse-chorus-verse convention, 'Taxidermy' is, to all intents and purposes, verseless and chorusless. It drifts freely and without restriction, harkening back to the jazz and blues teachings of James 'Blood' Ulmer, Muddy Waters, Elmore James and their studious pupil, Hendrix. And like its forebears, After Robots is sultry and sweat-soaked, as though permeated by the heat and humidity of Zululand.

The warm, brass-laden funk of 'Molalatladi' opens the album. Mcata's staccato guitar licks – both electric and acoustic – give the song (and much of the album) that iconic mbaqanga sound. It's almost African rootsy, like Amadou and Mariam, but it's younger and more masculine. Mcata's frenzied, effects-heavy guitar freestyling and Ramoba's equally bewildering drumming forays add testosterone, giving the album muscle and the attitude of men hardened by a politicised youth. 'Banna Ba Modimo's Mexican brass flourishes even call Calexico to mind. And it's these rich layers of instrumentation that maintain the album's element of surprise. After Robots is never particularly redolent, despite the easy post-it note band-association practices of the Western press.

Occasionally, tracks drift with a little too much freedom. Standby and Kwa Nqingetje both aim for the impalpable druggy psychedelia and somnolent reflection of The Doors and Led Zeppelin. Both are partial successes that certainly wouldn't be harmed by some moderate drug use (alcohol, for example). The latter track in particular is epic in its exploration. Depending on personal preference, it's either a triumph or a trier of patience. 'Skeleton', however, does push the patience and only lifts off with a final rocket-fueled minute that would make Slash blush with excitement. After Robots' fretwork alone could soundtrack the ascent to heaven or the descent to hell, with equal aplomb. As the plaintive strums of Tselane close the album, it's as though the heat of a long African day has subsided and dusk is finally setting in.

After Robots isn't perfect. But then being courageous isn't always about winning. When it's at its best, After Roberts harbours a brave sense of adventurism, a fearless experimentalism. And yes, it can sound like a million other things. But more often that not, it's just the glorious sound of nothing else.