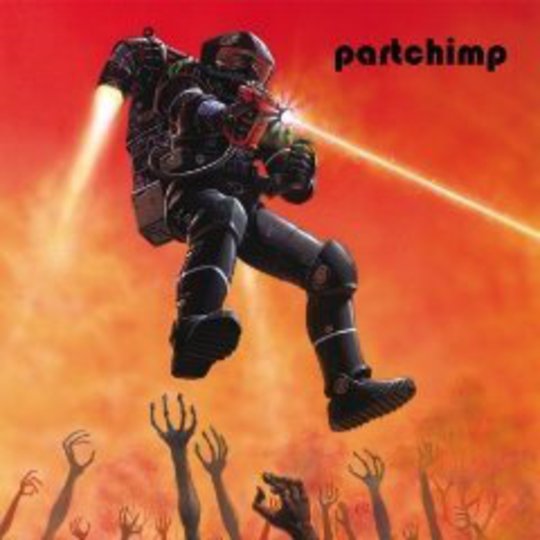 If one were to conduct a brief once over of the current UK music scene, it would not be unreasonable to arrive at the conclusion that things are getting a bit, well, serious. Thus in the current climate of recession, doom, unemployment and gloom, it’s refreshing to hear a band renaming their third LP (previously entitled Dark Side of the Moon) as Thriller in wake of the death of The King of Pop. And if the cover should feature a spacesuit clad human emptying some sort of laser gun into a mass of flailing alien limbs, then definitely consider me interested in whoever’s making the music accompanying such tongue-in-cheek artistic statements.

Of course, I’ve always been on the side of Part Chimp. The Camberwell band represent the bloody and bruised underdog of UK rock music – unpretentiously brutal and loud. Naturally, they’re a phenomenal live act, but on this, their third LP, released on Mogwai’s Rock Action imprint, they might just have worked out how to translate their onstage ferocity onto record.

Thriller feels absolutely huge. It sounds like it was recorded in a wind tunnel full of amp stacks, so full and immersive is the sound. Album highlight ‘Dirty Sun’ rumbles, screeches and crashes like an oncoming thunderstorm, anthemic vocals straining against the wind and the rain of guitar and battered percusion. Opener ‘Trad’ is detuned desert rock, powered by new recruit Tracy Bellarie’s (ex-Ikara Colt) furiously overdriven bass. The filthy raucousness of ‘Sweet T’ shows how fuzz and distortion should be used: as a system overload, the music straining to escape the confines of the speakers or headphones.

That sense of humour exhibited on record title and case manifests itself musically as an absurdist sense of bombast, with nine minute album closer ‘Starpiss’ leering and lurching between full throttle fuzz pedal to the metal and detuned fret mangling. This isn’t Muse we’re talking about, however, and whilst the tapped solos might raise a grin, there’s never the feeling that the record has descended into the histrionic.

If there is a weakness to the Thriller, it’s the mildly repetitive formula: take a variation on a Sabbath riff and then crank it through a mass of pedals, fuzz and amplification until it positively hums with electricity, sweat and brawn. Yet it would be unfair to state that there hasn’t been any ground covered since I Am Come and Chart Pimp. ‘Super Moody’ nods at Harvey Milk’s back catalogue, starting as a chiming, almost hymn-like composition, before erupting into ear splitting life. Similarly, ‘Tomorrow Midnite” takes a full three minutes to erupt into life, Tim Cedar’s cooed “And when time smiles/we’ll cry” serving as an eerie warning for the gigantic wall of sludge that’s about to descend.

I don’t think I’ve managed to capture just how enjoyable and driving the music contained on Thriller is. Maybe it’s because the hooks are so gigantic, or the execution is so taut, but there’s something indefinably special about this record. It deserves to be played again and again, and not just as proof that Hydrahead and their US associates don’t hold the monopoly on breakneck rock music. Part Chimp they might be, but Thriller is one hundred percent prime rock and roll, that stands head and shoulders above the other knuckle dragging apes.