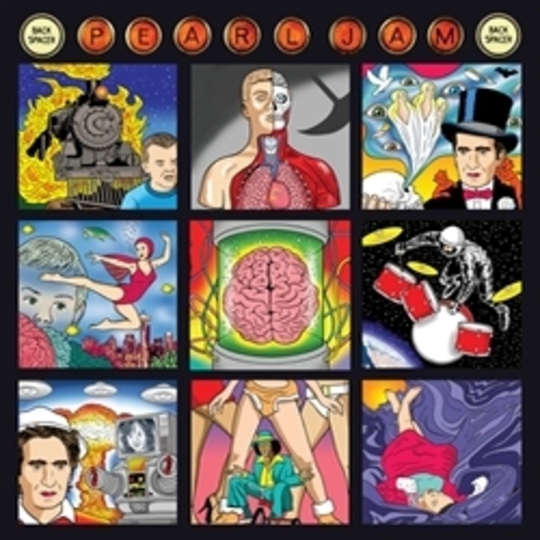 If they've never exactly been fashionable, Pearl Jam have always been on better terms with the UK than received wisdom would have it. Though Ten’s naffer excesses were oft used as a stick with which to beat the band – generally to the flattery of Nirvana or the Britpop acts – the fact that exactly the same ‘throwback bores’ argument was trotted out in the face of the savage Vs and unhinged Vitalogy probably indicates that there was no real dislike for those records, more the actual idea of Pearl Jam.

Once Britpop had finally sloped off (though not before taking the almighty shit in the bathroom that was the Stereophonics) we were all good to go: 2000’s Binaural was accompanied by glowing reviews, the band’s first full UK arena tour, and such articles as this excellent, thoughtful interview with NME’s John Mulvey.

Okay, it didn't really last, for which the agonised Riot Act and the distraction of the (ahem) New Rock Revolution can most likely be blamed. But the fact is that general critical acceptance of the band has been on the cards for an age. Sniffing the upbeat press and general goodwill around Backspacer and it would appear it's finally happening for real.

Which is fine and all, but um, yeah... shame it’s not one of their best records. Out goes the seething emotion and hard-fought musical builds of yore. In comes the first set of straight down the line pop songs Eddie Vedder and co have ever written. Fortunately, they're not the shabby kind.

Backspacer commences with ‘Gonna See My Friend’s twangy rollick’n’roll, easily the giddiest opening track on any Pearl Jam record. While Vedder’s lyrics would seem to be a fairly gloomy channelling of a junkie’s lusts – “I'm gonna see my friend for what I require ... I'm sick of everything, I'm gonna see my friend, make it go away” - his borderline ecstatic delivery is such that one can’t help but interpret the actual sentiment as “yeeeeeeeeeeeeeeeeeeeeeeeeeeeeeeeeee-haaaaaaaaw!” It's good, and the next three songs are frickin’ sublime. ‘Got Some’ cruises in on an ultra-tight new wave guitar figure, Vedder flipping his softened, almost adolescent voice through the catchiest vocal hook of his career – “every NIGHT with the light ON where you GONE? WHAT’s wrong?” The lyric would appear to be the flipside to ‘See My Friend’ – Vedder is the one dispensing the relief – but again, it doesn’t feel like there’s any darkness here, just a glorious burst of pop-rock, delightfully in love with its own momentum. ‘The Fixer’ offers a third track on the same theme; once more, the name suggests something untoward or seedy, but the music's life-crackling surge and lines as blessedly optimistic as “If there's no love, I wanna try to love again” says otherwise. ‘Johnny Guitar’ offers more deliriously flip rock pop, almost to the point of pastiche, Vedder casting himself as a lovelorn horndog who finds himself thwarted in his love of “the girl in red so innocent” by the eponymous lothario.

Indeed, stylistically and lyrically Backspacer would seem to consist of the songs Vedder might have written as a teenager had he been less monumentally fucked up at the time, with the band drawing heavily on the pop of both their youths and their parents’ before them – certainly ‘Last Kiss’ now seems way less anomalous.

You may miss the full-force guitars and the molten eruption of Vedder’s wounded soul, but we’ve had plenty of that before, and a lot of Backspacer is a lot of fun. A shame, then, that they’ve kind of messed up the quieter songs, which dominate the record's second half.

Pearl Jam’s gravitas – musically and lyrically – has enabled them to write some of the more affecting ballads and lullabies of recent times: ‘I Am Mine’, ‘Wishlist’, Nothingman’, ‘Better Man’, ‘Daughter’. Though Backspacer's only actively excruciating note is the beardy folk ramble of ‘Just Breathe’, the likes of ‘Unknown Thought’ and ‘Speed Of Sound’ feel sapped by the record's lightness; it's fairly self-evident that these tracks would have sounded better if recorded at literally any other time in Pearl Jam's history. The occasional presence of an orchestra is just bewildering: this is a band that reaches their emotional highs through blood, sweat and tears, not symphonic gimmicks.

Still, if Vedder's once inferno-like angst really has subsided, it's entirely to him and his band's credit that they've diverted their energies elsewhere. Backspacer is defined by its opening salvo of choons, a joyous fusillade that seems likely to finally finally finally put the band's rock dinosaur rep to bed. It’s the long-term implications that are more worrying: there are weak songs here, and they’re weak because they lack qualities Pearl Jam used to possess in rough hewn spades. Still, Backspacer is very much calculated to sound the way it sounds, and suggesting Pearl Jam have lost anything would be premature. Ultimately there’s no point fretting about the future when contemplating a record that’s so very much a celebration of the moment.