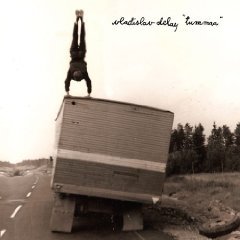 Even by his own fierce standards, Sasu Ripatti has has been tremendously prolific in the last nine months. Since the release of Co»

after several years of releasing albums through his own huume label, legendary producer vladislav delay signs to the leaf label to release 'tummaa', his most organic, acoustic record to date. sasu ripatti's landmark work as vladislav delay for chain reaction and mille plateaux has influenced an entire generation of electronic musicians, and the leaf label are extremely proud to welcome him aboard with this beautiful album. 'tummaa' sees him collaborate with celebrated scottish soundtrack composer craig armstrong (on piano and rhodes) and argentine saxophonist / clarinetist lucio capece, with ripatti returning to his background as a jazz drummer and percussionist. ripatti's reputation as a genuine musical maverick precedes him, with venerated work as delay, luomo, uusitalo and with partner antye greie as agf/delay. he has also recently recorded an album for honest jon's as part of the moritz von oswald trio. he has collaborated with artists as varied as black dice, massive attack, towa tei, jake shears and robert owens.
description from www.roughtrade.com