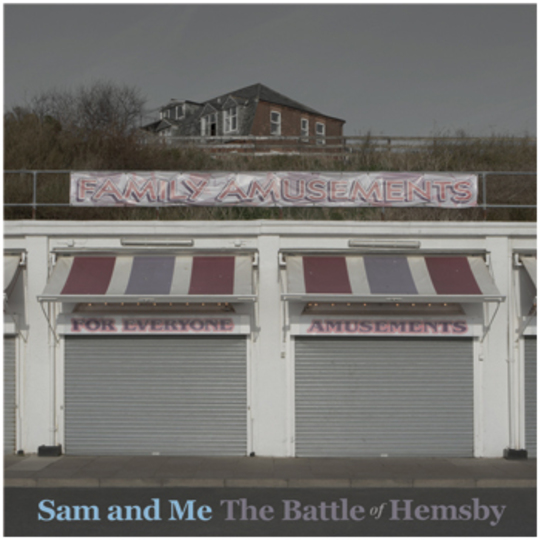 Sam and Me are a songwriting duo who settled upon their rather straightforward name after playing together for over ten years under names including Datura Dream. 'Sam' is Sam Zindel and 'Me' is songwriting partner Rowan Dawes, who are complimented by backing musicians Mitchell Johnson and Dan Black. Their moniker came about as a result of an early gig booking where Rowan casually described the band as "just Sam and me". Such a laid back attitude is reflected in the soft harmonious nature of their music, but, unfortunately, so too is the mundanity of their name and the dreary seaside resort depicted on the cover of The Battle of Hemsby.

Album opener 'Sonic Boomerang' isn't quite the auditory fairground that the title suggests, but is still one of Sam and Me's more adventurous offerings. Opening with 8-bit electro sounds alluding to the arcade imagery of the artwork, its foundations are light clip-clop percussion and a jaunty piano chord progression with a chorus which, thanks also to the close harmonies, somewhat resembles McFly's 'It's All About You'. However, this is mercifully offset by a kaleidoscope of other sounds; the aforementioned electro bleeps, steel drums, brass fanfares, swirling strings and best of all an audacious reference to The Flaming Lips' 'Do You Realize??". It concludes with a compositional left turn, where the jaunty rhythm gives way to stuttering snare rolls and powerchords as overlapping harmonies repeat "You give love and it comes back to..." until the musical backing has faded leaving just the vocal harmonies.

Indeed, the harmonic abilities of Sam and Me have been touted as their trump card, and for the first few tracks they are most impressive. 'Joyriders' is enhanced greatly by the Fifties ballad-style vocal flourishes amassed on the first verse and in a more expansive context later in. Musically, the song is equally intriguing, starting slow and ballad-like, moving into a spritely strum before being joined by some cheap keyboard sounds which segue into a widescreen interstellar passage in a move reminiscent of the lo-fi epic qualities of Sophtware Slump-era Grandaddy.

However, although Sam and Me often tip their hat to a number of more leftfield influences, they themselves plough a much more middle of the road furrow. The start of 'A Lying, Down Disposition' is so similar in sound and form to '1945' by Neutral Milk Hotel that it must be intentional. Unfortunately, the track doesn't share any of that songs more captivating characteristics and its overabundance of chord changes leaving it lacking a hook.

It is also around now that the harmonies begin to grate in their constant presence. The two singers are pretty indistinguishable from each other and lack expressive range seeming to revert to one whimsical mode throughout the album. This has repercussions for the lyrics. Sam and Me's press release boasts about their 'lyrical sense of humour'. In reality the lyrics more often cringe-inducingly earnest, as on 'Everything Is Yours': "The records that you play, the girls you asked to stay, the ones that got away, they make you who you are."

Ultimately, Sam and Me fail to transcend that mundane cover image, instead embodying it completely. As the flashing lights and sounds and other attractions of an amusement arcade can't cover up the dreary environment of the British seaside for too long, so too the harmonies and aural gimmicks of The Battle of Hemsby can't distract from its unmemorable MOR melodies, clumsy lyrics and personality vacuum.