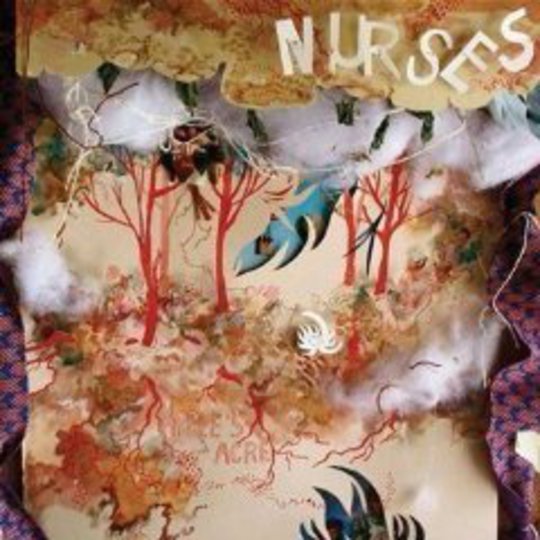 There’s something quite romantic (clichéd as it may be) in the image of musicians wandering the highways of the USA in search of somewhere to settle to record their masterpiece. Probably aware of this, Nurses’ core constituents Aaron Chapman and John Bowers did their fair share of roaming before picking up drummer James Mitchell, settling in Portland, Oregon, and emptying their toybox on the floor to produce Apple’s Acre.

The record is a patchwork of the most gorgeous type of euphoric but bruised pop. The most instantly recognisable thing about Nurses is Chapman’s voice, which flits back and forth between a strangled Joanna Newsom and Avey Tare at his most rasping. The swelling and soaring of the vocals regularly lift the songs to emotional highs. They also convey a real vulnerability which is at times at odds with the melodies chirruping away under the surface, most notably so on ‘Caterpillar Playground’.

Such distinctive vocals put serious pressure on a band to provide suitably interesting instrumentation. With such a powerful instrument so readily on display, the whole thing might have fallen a bit flat without a strong supporting framework. Happily, Nurses’ are more than up to this challenge, as they pack Apple’s Acre with rickety piano, overbearing organ and electronic flourishes, dousing the whole thing in blissful melody.

One of the most interesting and fulfilling things about Apple’s Acre is its sense of fluidity. It’s a living, breathing thing and just when you think you’ve got it figured out, it wanders off in a different direction like a mischievous child. It hints at this on opening track ‘Technicolor’, which is a journey in itself. It starts off with just Chapman’s voice at its most fearful and affecting, before mutating into a joyously twisted party atmosphere.

From then on, the album follows a similarly unpredictable course, veering between the pained and visceral ('Mile After Mile', 'Winter'), deranged torch songs ('Bright Ideas') and sheer unbridled elation ('Apple’s Acre'). The latter is one of the album’s real highlights, and comes as a wonderful surprise the first time you hear it, imbued as it is with that sense of urgency and gleeful harmonies that you would associate with the best pop songs of the Sixties.

As full as their songs are, Nurses also understand the value of being concise. It comes as a surprise the first time you realise that Apple’s Acre clocks in at only thirty five minutes, because it feels like there’s enough content here to fill at least an hour. Brevity is perhaps a virtue. It’s difficult to imagine such a joyful album ever dragging on, but it’s a clever stroke from Nurses to ensure that it never gets a chance to outstay its welcome.

Apple’s Acre is a tale of ambitions realised. Nurses set out to create a storybook of childish innocence, and they’ve achieved that. The album showcases their massive creativity and playfulness and is a fitting testament to the power of pop music to move your heart and head as well as your feet.