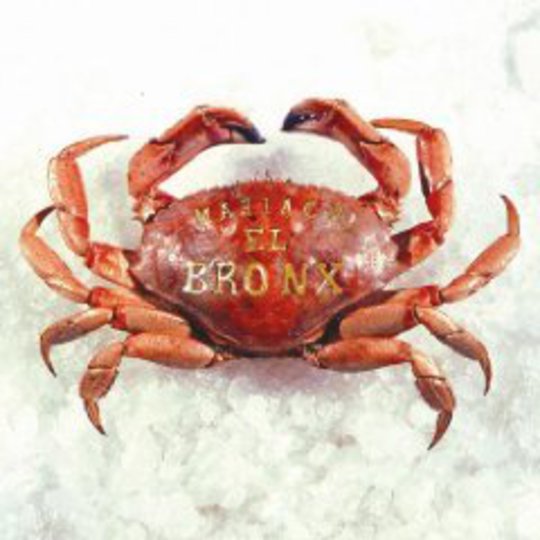 At no point in what I occasionally laughably call a career did I ever imagine writing about a mariachi record. Perhaps it’s because mariachi music rarely penetrates the mainstream – sure there was that rumour about Zach De La Rocha during the wilderness years, but I never saw pictures of him in a silver studded charro outfit so it probably didn’t happen.

So my lack of reference points for Mariachi El Bronx leaves me in that tentative position of starting from scratch, fairly uninformed. What do I compare it to? Should I reference The Bronx and their usual hardcore ways? Is it wrong to admire such a drastic shift in sound? Is it a gimmick? What SHOULD mariachi sound like? Have they captured the essence through instrumentation or simply made a modern approximation of it, liable to stand as the only mariachi record in a lot of collections? Does any of this even matter?

The burst of sunny trumpets and deftly strummed vihuela of opener 'Cell Mates' immediately brings a smile to the face. It springs clichéd images of Mexico through your head - the heat, the style of dress, perhaps a carefree celebration in the sun – and Matt Caughthran’s voice is lovelorn and understated. The subtlety of the layered violins brings a delicate yet compelling texture to the music. This pattern rings throughout, each arrangement surprising in its intricacy yet packing a dry emotional drenching of joyful vitality.

All the songs here revolve around the typical mariachi themes – basically love and loss – which are meant to be romantic, sweet and simplistic. There’s no complex lyricisms or deep metaphysical analogies, which of course renders these songs far more touching and relevant to anyone listening. There are no ills to be cured, just wrongs to be righted and flights of fancy to be followed.

'Holy' sticks out as a dramatic, almost haunting, inclusion with the violins sobbing and tremulously greeting a spiritual awakening. Caughthran sings “holy, the face of God appeared to me” and later “visions you see are not what they seem/even a God can be wrong” and it’s perhaps here that the complete contrast between The Bronx and El Bronx becomes clear. This is not The Bronx posing in costumes and playing cheesy love songs. It’s almost an alter ego so wrapped up in the vibe of Mexican musicianship that they’ve tapped into something heart-wrenching at times and a lot of fun at others. It bears repeat listening, and makes you curse yourself for perhaps dismissing a whole genre as all tacky serenades and tourist fodder. Heartless bastards that we are.

Though I can’t say what the motivation for this temporary transformation is, it’s clear that it’s as close to The Bronx’s hearts as their fiery, throat-wrecking hardcore. To say that their two sounds share anything more than the same members playing these songs would be clutching at burning straws. It is, however, far braver to switch drastically than rely on ‘progression’ (and what is that anyway?). The Bronx have never been attuned to the idea of progress, simply stubbornly sticking with a sound and its minute fluctuations within preset boundaries.

However ...El Bronx opens up so many possibilities. The musicianship is incredible, occasionally almost feeling wasted on the more throwaway tunes. It’s fair to say that the album drifts in and out of the background as their dreamy, sun-worshipping flow aren’t consistently engaging. However, the idea of mariachi music is to lull and to soothe, not to punch you in the face at any opportunity. You can imagine people bemoaning substance and disliking the soft vocals – lack of research into the point behind mariachi may lead to inappropriate reviewing for instance – and that just means this record isn’t for them. Fine. Nevertheless, if you’re willing to stick with it, these melodies still swing with the same scent of irresistibility from their first novelty impact, except one subsequent listens you’ll be admiring the layering of instruments and the rather lovely sentiments enclosed in the fluttering arrangements.

So, now all that’s left to decide is that number down there. Do I like this because it’s the fucking Bronx in mariachi disguises and they can do barely any wrong? Am I enchanted by their utter disregard for other people’s opinions on what they’ve made here? Could I be swayed into thinking mariachi is worth investigating? You know what? Who cares? This album is enjoyable, amusing, sensitive, impressive and above all – because we’re all in the habit of forgetting this – FUN. If you’re not having FUN when wrapped in your musical cocoon, then why are you listening/discussing/writing/playing at all?