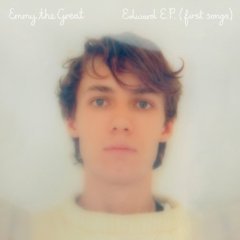 So many dozens of great records are made each year that it’s quite easy not to think about those that will never see the light of day.»

the first few copies only available at rough trade come with a 16 page booklet with some of emmy's album and tour diaries in it - it's fictional and really funny. limited to 500 copies. emmy the great releases the new 'edward ep' on her own close harbour label. the 12" ep sees emmy and her band revisit some older songs, recently rekindled on the road and recorded for inclusion on a deluxe edition of her debut album. emmy, "when we were touring the album, people kept asking for these songs and they developed into encores...we did the ep with those fans in mind". the four song ep features tracks written early in emmy's career, but only recently recorded, returning to earlier muses with engineer adam beach - responsible for her very first demo more then three years ago - and artist edward fornelies who lends his name to the release, as well as his image to the cover. the ep's tracks 'edward', 'bowl collecting blood', 'two steps forward' and 'canopies' all include cultural and emotional references of a girl growing up; unique to the time of writing and notably different from the sessions for her recent album. recording this ep brought back a lot of memories of when songwriting was done on a whim, and before anything got even remotely serious, and it's brought a lot of joy back into my songwriting now, recalls emmy, "siouxsie sioux once said when she sings her old songs she recognises that they were naive, but she stands by them, and i feel the same way."
description from www.roughtrade.com