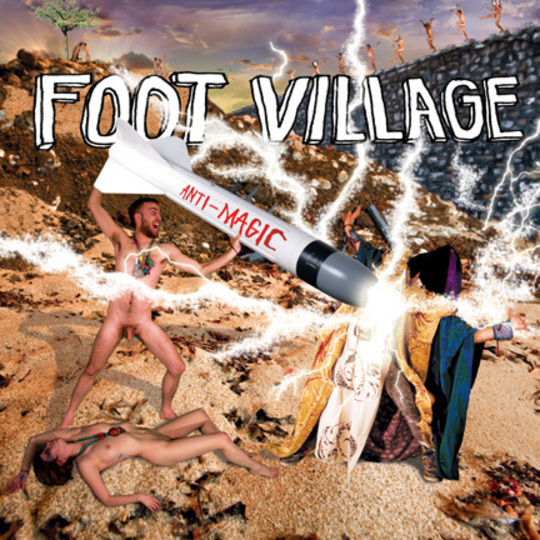 Ah, the concept album. Nothing like it has the ability to make a project fly with unbridled creativity or sink under the weight of convoluted ideas. Except perhaps the double (or triple) record.

Some bands just work better when tied to a theme or a story, while others end up creating a shitload of filler to pad things out and keep the narrative moving. Recent bands to triumph in this medium include acts as diverse as Mastodon, The Decemberists and Of Montreal.

Add Foot Village to that list. The band aren't content to just make a concept album, a self-contained story within one record. Hell no, they've built a concept world.

From the press release: 'First album World Fantasy was concerned with songs about other countries, whilst follow-up Friendship Nation documented the founding of Foot Village as a nation in it’s own right.'

Anti-Magic is the story of this nation’s first war. And by God does it sound like it. Who would've thought that blunt drums and vocals could sound so fucking brutal? So fucking vital? But here it is. Anti-Magic is more crushing, musically and emotionally, than the work of any hardcore, metal or punk band I've heard in a long long time.

I have to admit upon first listen I gave a chuckle. It seemed a pretty comedic concept: frenzied yelping over 'Stomp' esque drum freakouts. I wondered how much I could take. I wondered how much a band could do with such a limited musical set-up, and how I'd make it through an album's worth of it to get a review out the other end.

Only the human voice isn't limited, it's the most expressive, adaptable instrument we have. The oldest form of communication. Foot Village know this only too well. It's a kick in the face to the bloated prog corpse of concept albums that favour the 'throw everything at it and see what sticks' approach, and it sounds all the more human for it. As a concept album about human warfare should.

It's a draining listen, for sure. There's little or no respite to the pounding, tribal percussion, save for the near vocal-only 'Grace's Death', the most naked, vulnerable and affecting track on the album. Created nearly entirely from the four band-members' voices, it uses repetition and chanting to an extremely emotional effect. In fact, there have apparently been instances of audience members breaking down into tears at Foot Village live shows due to their cathartic nature.

Anti-Magic is like someone taking the concept album and tearing it inside out to reveal the percussive guts and naked emotion that have been hidden by the flab and excess of the past. Long live the nation of Foot Village.