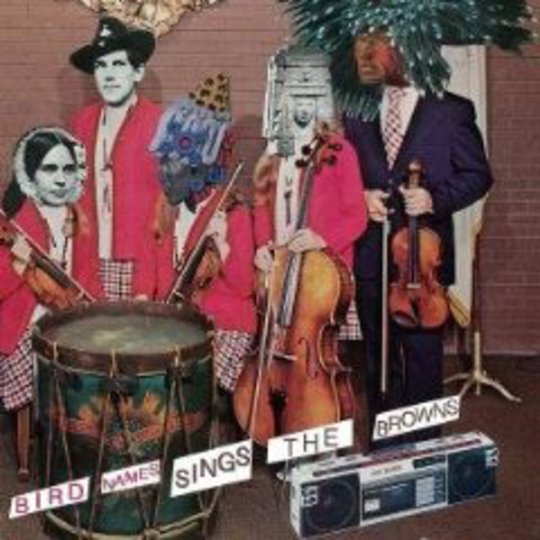 I’ve always had a soft spot for records that are just short of being great. You probably know the ones I mean: they have echoing feedback distorting the vocals, the volume turned up too high on the 4-track creating a low background ‘fuzz’, experimentation and ideas bouncing around in their sub three minute song innards which never quite reach the heights they aspire to, but which leave you convinced that the band could one day release a great coherent record. They also give the impression that the songs merely fell out of the musicians’ minds spontaneously and took refuge on some kind of handy nearby recording device, and that coming up with a song is as easy for them to do as wasting five hours of your day on the internet is to you. The bastards.

Hailing from Chicago, Bird Names are five prolific friends who (sporadically) do just this. They wrangle very bizarre noises indeed out of a wide variety of musical apparatus. Sometimes it’s a bit good and causes your ears to prick slightly upwards. Sometimes it’s a bit generic and causes you to reach for the skip button. But then you remember that 11 of the 13 tracks on the record are under three minutes long and so you save your legs from unnecessary extension.

I suspect that if you were to look at their record collection then Captain Beefheart and similar off-key psyche folk pop would feature heavily, for his influence hangs a little too blatantly over Sings The Browns. The album is bookended by two tracks that could easily be in any Magic Band set (barring the lovely vocals at the heart of ‘Taxicabs And Bicycles’), while ‘Days Elevated’ / ‘Scandinavia’ simply feel like Beefheart offcuts.

Thankfully, or rather frustratingly, Bird Names aren’t just a one trick pony and when their other influences and own talent take centre stage things improve tenfold. Like in the middle section of ‘She Works In A Store’ where the chime bars glisten and twinkle like a tuneful April shower; or the dual hazy vocals on ‘People Should Get More Aware’ reminding you of The Moldy Peaches former glories. When a lo-fi early-Coxon-esque tune briefly shatters the dysfunctional ‘I Had A Girl’ you start to feel that the album may have turned a corner.

But the frustrating thing about Sings The Browns, and to a certain extent most of those other records you no doubt own of this ilk, is that it simply isn’t a great record when taken as a whole. It’s a scrapbook of musical clippings - a notebook of half-realised thoughts needing both heavy editing and thoughtful elaboration. It may have its own unique, innocent charms and isn’t necessarily a bad way to spend some time, but it is sadly unlikely to drastically alter your musical outlook or provide a good coherent listen. And that’s why I will likely continue to have a soft spot in my heart for vagabond records like this one, but alas no more than that.