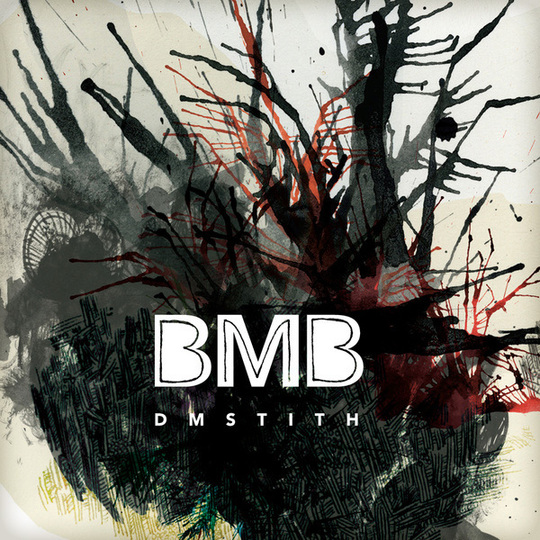 A reworking of the album track from DM Stith's superb debut album Heavy Ghost, 'BMB' is a spectral ballad which balances on a knife edge in the sliver of calm between euphoria and heartbreak. The track seems to occupy inordinately large dimensions without resorting to cheap loud/quiet tricks to build tension. Instead, 'BMB' is propelled by a sparse piano which is menacing and consistent, dischordant and measured, essaying the fractured spirit of an obsessive love. Of course, this is hardly the most original subject for a song, but what makes 'BMB' interesting is the way it is handled with so little bombast, yet without ever becoming dull or clichéd. Stripping songs down to their bare bones in this way always strikes me as a gamble for an artist, the results can be stunning, but the lack of window dressing equally has the potential to viciously expose the dilettante, trying to conjure concepts so primal and powerful that men of mediocrity cannot hope to marshal them for their own ends.

The collection of tracks on the EP which 'BMB' lends its name to (the projected first of three this year) will likely not be to everyone’s taste, but whatever your musical creed, it is undeniable DM Stith commands whatever the elusive fortitude is that’s necessary to carry off this tricky modus operandi. His credentials hit you straight between the eyes as soon as you hear his gentle yet engaging vocal. His voice is well rounded and imaginative in its range, but tacitly aware there is no need to hyper extend its emotive content to grab attention. As the EP progresses, Stith employs the same economy of drama to continue to explore emotions complex enough to tell their own tale with a minimum of hyperbole. The choral grace of 'Around The Lion Legs' removes him from the oppressive darkness of 'BMB', replacing it with a shimmering harp and African spiritual influence which you could almost imagine Animal Collective channelling in one their quiet moments. 'Around The Lion Legs' would still be easy to pigeonhole into the troubadour box, should you be so inclined, but it is enough of a shift from the opener to instil a welcome balance to the EP.

The covers of 'Suzanne' and 'Be My Baby', by Randy Newman and The Ronettes, respectively further point towards an eclecticism and sense of mischief which is absent from many of his peers. Although Stith thoroughly stamps his own personality on the tracks, there is enough humour and homage in his interpretations to indicate that Stith is a real student of music, crossing several decades and styles in his interest. This expansiveness is also present in the choice of the two 'BMB' remixes which form the middle portion of the EP. Both recognize the simplicity of the original track will allow a remix to add layers without over-egging the pudding, and curiously, both see this as an invitation to inject an electro-influenced stomp resembling a more vocally gifted John Spencer Blues Explosion. Son Lux however is the pick of the two, incorporating much more of the original spirit of 'BMB' than Roberto C. Lange does.

At first glance, a record sleeve which consists of two original songs and five remixes/covers has all the hallmarks of a cynical between-album fillip for an artists coffers. BMB EP, however, manages to elevate above such mediocrity, instead traversing the corners of DM Stith’s musical make-up with an ever-present honesty and imagination.