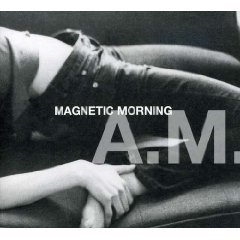 'a.m.' is the debut full length recording by magnetic morning - the unlikely song writing duo that is swervedriver's adam franklin and interpol's sam fogarino. the songs on 'a.m.' are the results of a collaboration that transpired outside of the material world; individually far ranging in sonic presentation - from the psych-drone of the opening track 'spring unseen', to the mid-tempo soulful bounce of 'the wrong turning', to 'a.m's closing track 'athens 5' with it's dark, dense, sound scape as a backdrop to two minute sci-fi tale about the discovery of 'space junk' floating in an athens, ga river. these concepts and ideas were volleyed through the ether, via email, from hawaii to england, new zealand to new jersey, and many other far reaching locales spanning the globe while the duo were on tour with their bands interpol and swerevdriver respectively. 'a.m.' was recorded and mixed at normal studio in athens, ga, during the sweltering month of august, 2008 by the aptly named recording engineer andy lemaster (now it's overhead, maria taylor, rem, conor oberst), and former sugar bassist david barbe (drive by truckers, bob mould, rem).
description from www.roughtrade.com