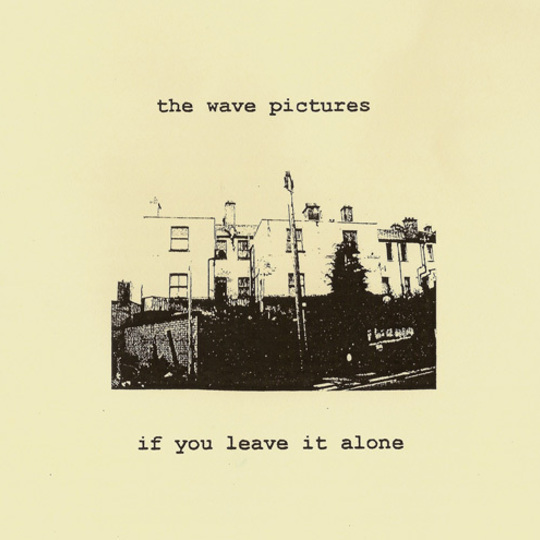 That The Wave Pictures have been writing and recording together for the best part of a decade will probably come as a surprise to many, particularly those who first discovered them on the back of last year's Instant Coffee Baby long player. While the word 'prolific' often gets bandied about without so much as a blinking eyelid, this Loughborough-cum-London trio really do epitomise the word in its truest form, now releasing a seventh album of original material with If You Leave It Alone, with collections of Herman Dune and Bruce Springsteen covers and a host of other projects both as solo artists and collaborations from all three members. In hindsight, maybe the phrase "extremely busy" would be a more appropriate description of The Wave Pictures, although perhaps the most preferable adjective, certainly in terms of the quality of their output, would surely be "consistent".

If anything, it's something of a travesty that wide-scale recognition has only come their way in the last 12 months or so, as both 2004's mostly recorded live The Airplanes At Brescia and Sophia, released two years and three albums later, make valid claims as two of this decade's most underrated bodies of work.

Its perhaps ironic then that The Wave Pictures find themselves victims of their own success in that If You Leave It Alone is actually their most anticipated record thus far. Certainly for lesser bands, attempting to follow up an album so near damn perfect as Instant Coffee Baby would be daunting to say the least, but for messrs Tattersall, Helm and Rozycki, it's merely a case of business as usual. As we've come to expect from David Tattersall, his lyrical couplets form the centrepiece of the record, most noticeably on the title track and the gorgeous mid-point that is 'Tiny Craters In The Sand'. Where the former takes on a self-consoling role lamenting days gone by, the latter, musically similar to Instant Coffee...'s 'Strange Fruit For David', is a more upbeat love song that "bounces on the streets and lands on Bournemouth beach..." in true whimsical Wave Pictures fashion.

In places, the ambiguous charm of Tattersall's lyrics - 'Too Many Questions' sees its subject matter pining "To find a boy to hold me tight" while 'My Kiss' and its "I beat the hypnotist!" refrain would be a statement of bravado if there wasn't an underlying portent of Jarvis-like campness furrowing round its surreal edges. Elsewhere, Tattersall's poignant reading of Sam Cooke's 'Nothing Can Change This Love' gallantly closes the record, while their obvious love (and knowledge) of music's past references see 'Bumble Bee' - essentially old folk standard 'Froggy Went A Courtin'' played to the tune of The Clash's 'Rudie Can't Fail'. 'Softly You, Softly Me' could be the latest incarnation of Irish folk staple 'Whiskey In The Jar' as rewritten by the constabulary of twee, and shouldn't be ignored either.

All in all, If You Leave It Alone isn't quite the instantaneous all-singing-and-dancing sequel to Instant Coffee Baby many were expecting, but then part of The Wave Pictures charm is that they operate on their terms only, and given time, and several more listens, by the turn of 2009 there's every chance this record's appeal will have grown in dispatches.