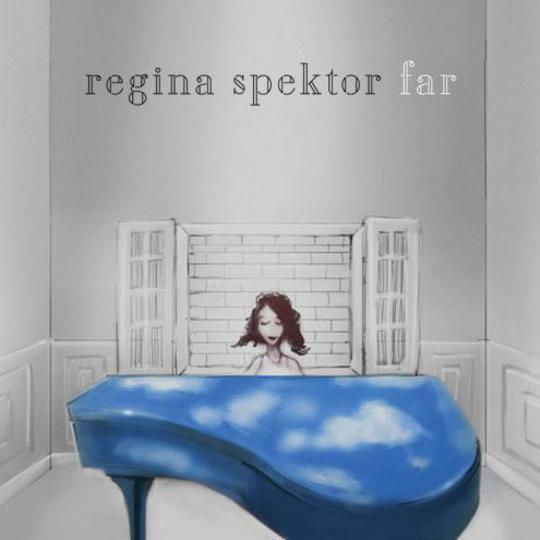 What if you found a sweet-looking older man’s wallet in the street? Or the local lake turned as thick as butter? What if there really was a ‘human of the year’ contest? Or you inexplicably forgot the words to your favourite song?

Such are the scenarios posited on Far, and objectivity be-damned: I absolutely, completely adore Regina Spektor. Certainly a little bit when I was introduced to her via a friend’s copy of Soviet Kitsch; a little bit more when said album received an unprecedented three consecutive plays on a communal stereo soon after; more still when she captivated a half-full Cardiff Barfly around five years ago, and reaching titanic levels when I attempted to interview her over a crackling phone line some time later. That the cute puppies occupying the lorry next to her proved a significant distraction made no odds: she is charm personified, and I’d wager that’s why so many other self-respecting indie kids love her too. It’s also probably why Begin to Hope didn’t sit so well with many of them.

Major label-signed and full band-backed, it was perhaps wishful thinking to expect the elusive magic dust – so liberally sprinkled over her earlier work – to stay the course for that record. That said, it didn’t make it any easier to hear ‘Samson’ shorn of its slow-paced elegance, or accept that piano stool-hammering and railing against Mary Ann were out and radio-friendly songs about, well, being on the radio, were in.

What of Far, then? It’s not a return to roots; at least not in the traditional sense (i.e. a band play on most of it). But what it does exceptionally well is embody almost every aspect of what made her so great in the first place.

Mainly, it does this via enchanting songs: 13 of them in total. But more than that, it shares with her earlier albums an easy confidence that sees her fancies boldly take flight, no matter how ill advised they might seem on paper. While her manipulation of cadence and delivery never quite reaches the inspired heights of ‘Pavlov’s Daughter’, the consistency Far exhibits offers ample recompense. That it does this while taking enough left-turns as to make you dizzy is utterly admirable, as what initially seems a straightforward ivory-centric affair reveals hidden, intoxicating depths.

Where so much of Begin to Hope sounded like songs designed to be played by one person – rendering the band by and large superfluous – these compositions actively benefit from the extra dimensions added to them. Furthermore, from svelte opener ‘The Calculation’ onwards, they flit almost imperceptibly between the comic and the tragic, the heady and the impulsive. The metaphysical pondering of ‘Blue Lips’ lines up next to the sweet pop of ‘Folding Chair’, itself followed by the Russian sci-fi whir of ‘Machine’, succeeded by the barrage of minor key images that make up ‘Laughing With’ (“No one laughs at God on the day they realise / The last sight they’ll ever see is a pair of hateful eyes…”).

There are plenty of reasons to love Far. I haven’t even gone into how ‘Two Birds’ is one of the most immediately disarming songs I’ve heard all year, waxed lyrical about ‘Dance Anthem Of The ‘80s’’ coquettish allure, considered ‘Human Of The Year’’s breathtaking lyrical turns or discussed the joyful manner in which every hypothetical scenario (of the kind that opened this review) is treated. Perhaps its crowning achievement, though, is the only song on here to exceed the five-minute mark, ‘Genius Next Door’ – a spiralling Gothic narrative that comes on with all the otherworldly beauty of a Haruki Murakami story or Tim Burton film.

Edges have been smoothed, yet idiosyncrasies remain. Far is a bright and gratifying listen; one that doesn’t aim at ideas above its station or flounder in search of unity. It’s simply the sound of Regina Spektor crafting the kind of impeccably sweet, sometimes dramatic and perpetually detailed songs she’s always sung best.