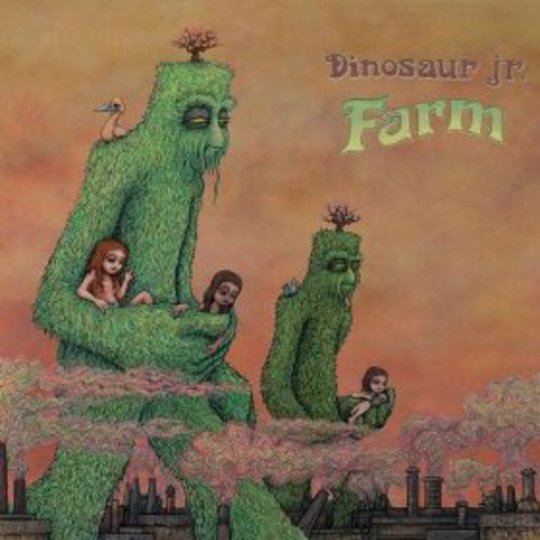 Nirvana might have been the band the NME proclaimed as 'the Guns N' Roses it's OK to like' back in 1991, but it was earlier work by Dinosaur Jr, along with fellow Massachusettians the Pixies, that had first thrust loud, screaming guitar into the heart of indie music (which before they did so was never called 'indie rock'). J Mascis and Lou Barlow had first played together in the hardcore band Deep Wound, and coming out of that scene while having a taste for subtler and more melodic bands like The Dream Syndicate - part of the Paisley Underground scene actively opposed to the violence of the LA hardcore scene - Dinosaur Jr sat at the meeting point of several styles. From the other side of grunge and nearly two decades of cross-genre pollination the blending of country motifs with 1970s metal riffs, or lacing the spikiness of punk and garage rock with strands of folk and goth rock, doesn't seem half as weird as it did in the mid-1980s, when such collisions weren't just rare: they were virtually non-existent.

On their first album, 1985's Dinosaur these different styles were uneasy neighbours, each song paying homage or taking its cues from a discrete genre. Two years later the release of the band's masterpiece, You're Living All Over Me, bore witness to a new approach: now a single song might buck and twist from classic rock to prog, metal, folk and hardcore in the space of a few minutes. Dinosaur Jr had arrived.

Skinny version: follow-up Bug (1989) was a more melodic set that contained stone-cold indie disco classic 'Freak Scene'; not long after that Lou Barlow was booted out of the band (the cycle of loathing and reconciliation that has come to characterise Mascis and Barlow's relationship is one of the best recent examples of how two great talents being in proximity to one another can turn seriously ugly); Barlow threw himself into side-project Sebadoh, more than a few of whose songs (see 'The Freed Pig' from III) were often thinly disguised or blatant swipes at Mascis; Dinosaur Jr capitalised on the alternative rock explosion that they'd done much to lay the groundwork for, the peak of their commercial success coming in 1994 with the not-all-that-good Without a Sound. Mascis retired the Dinosaur name in '97.

When news came that a rapprochement had taken place between Mascis and Barlow and the original Dinosaur Jr lineup was reforming it prompted that strange mixture of pant-wetting excitement and stomach- wrenching disappointment that results when a band with a great legacy risks making you bear witness to the bit of their careers when, well, when they went a bit shit, really. Pixies made a triumphant return to touring a few years ago, but 'Bam Thwok' aside they've steered clear of tarnishing their near-enough impeccable discography. Jane's Addiction's form was less untouchable to begin with, but Strays was still unforgivable, finally making it impossible to deny that anyone who had anything to do with Porno For Pyros could have been involved in writing 'Mountain Song'.

Fortunately Dinosaur Jr's comeback record, Beyond (2007), was a triumph: stacked full of soaring melodies and jaw-dropping solos, it married the brute power of You're Living All Over Me and Bug to the expansiveness of Green Mind and Where You Been, featured a couple of great Barlow songs, and saw Dinosaur Jr reinstate themselves where they belonged somewhere near the apex of the indie-rock pantheon.

So, finally, to Farm, which every bit the equal of Beyond; maybe even better. Sonically we're between Where You Been territory, with songs like 'Ocean in the Way' and 'Plans' displaying the sprawling mid-tempo grandeur that defined that album, and others that deliver the more needle-precise hits administered on Bug and You're Living All Over Me ('Over It', 'There's No Here').

The downsides include, surprisingly, one of Lou Barlow's two contributions, the forgettable '60s-ish stomper 'Your Weather', and the strange decision to misplace his excellent bass-led grinder 'Imagination Blind' at the end of the album after the epic eight-plus minutes of 'I Don't Wanna Go There' which, ending as it does with four minutes of guitar-shredding glory, has got 'climax' written all over it.

Happily these disappointments are more than counterbalanced by the satisfactions provided by the classic Dinosaur Jr blend of offhandedness and euphoria that characterises opener 'Pieces', the glorious strut of 'See You' and, oh, maybe five or six world class guitar solos of the type Mascis specialises in: deceptively ragged around the edges, the notes looping and spilling from the pickups like his guitar's dying but, you know, it's about as happy as can be about it.

Mascis has always been underestimated as a lyricist - possibly because his stoned goat drawl tricks people into thinking he doesn't attach much importance to what he's got to say. Additionally, the way his writing specialises in questions so familiarly phrased that they slip easily past one's attention - 'where you been?', 'what else is new?', 'Baby, why don't we?' - reinforces the slacker cliche. It's easy to imagine that if a Dinosaur Jr album title generator existed it might spit out 'Want a Donut?' or 'Beverage' or 'No Way' without raising anyone's eyebrows.

Look behind the offhand delivery, however, and you'll discern a lineage of doubt, uncertainty and pain - of the quotidian, non-camped up variety - running through the band's entire catalogue. Farm is no different, reaching its height of distress with the repeated, wrenching cry of 'save me' on the beautifully sorrowful 'Said the People', which is as starkly emotional as anything produced by songwriters more noted for cutting to the quick. As Mascis has alluded, he might not necessarily be writing about himself just because the lyric is phrased in the first person, but that doesn't mean the sentiment is insincere. Likewise, just because an indie band is a quarter of a century old doesn't mean it can't still be setting standards their descendants might find it hard to match. Farm offers ample proof of that.