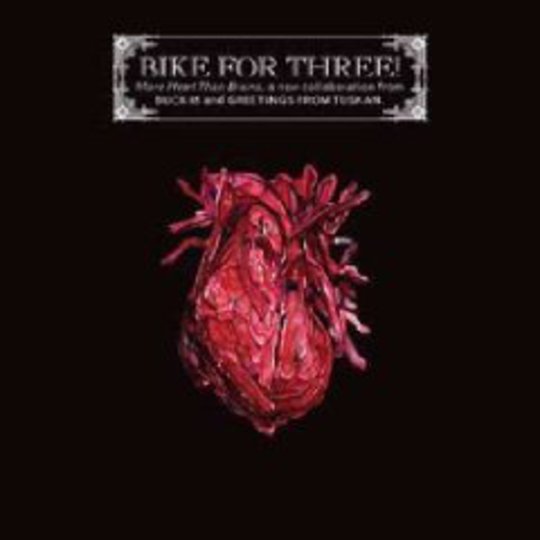 QUESTION: How many new collaborations can there be on anticon? Assuming that there are 30 songwriters signed to the label, and the typical project has two to four, use factorials to calculate the probability that the new Buck 65 project will be all about the shimmering synths, drones, and micro-beats.

If this is the kind of problem you can solve in your head, you may already be signed to anticon, and either way, Bike for Three! are the band for you. Long-time fans are bound to be excited by the prospect of Richard Terfry (aka Buck 65) taking a break from recording for Warner and diving straight into a new collaboration with synth programmer Joelle Phuong Minh Le (aka Greetings From Tuskan). What’s most exciting is the realization that this ISN’T an entirely new album: it’s a partial re-working of Square, Buck’s last album from the 'Language Arts' series. (See Buck’s self-deprecating review on his own website for some clues why he might have wanted to re-visit this...)

Previously, Buck’s rapped over lengthy, looped samples from decidedly un-hiphop sources (Metallica, say), or worked with more 'indie' musicians for a rickety, funk-tinged feel (not far off Why?). Here, the music’s almost entirely electronic, and composed from scratch, to shimmer, glisten, trickle, and chime in the ethereal, futuristic style of Dntel, Mum, Vangelis, or maybe even U2 and Eno's Passengers. Nice use of music boxes, too, as in mid-period Orbital or Bjork.

Somehow it works, this combination of abstract electronica and Buck’s postmodern mythology starring hoboes and runaways (“unknowns / they broke each others bones / jumped out of windows / built campfires / and lived like vampires”). Only ‘All There Is To Say about Love’ actually sounds at all mimetic (to match its lyrics), aiming for a freight-train rhythm that’s part Trans Europe Express, part Charm Of The Highway Strip; otherwise we’re in a gloriously utopian soundworld.

Most newcomers might recognize the poppiest moment, ‘MC Space’, as a dead-ringer for the Beastie Boys’ ‘Intergalactic’, but it’s also one of the closest here to Neon Neon (i.e. former Buck 65 collaborator Boom Bip, working with Gruff Rhys). Bike For Three! don’t often have the danceable poppiness of Neon Neon (though don’t get me wrong, they never drift into the background) but it’s hard not to think of that other collaboration for the simple reason: embracing a slick, futuristic, highly-produced sound has unexpectedly brought about the best album yet, by all concerned. Now to get me some Greetings From Tuskan…