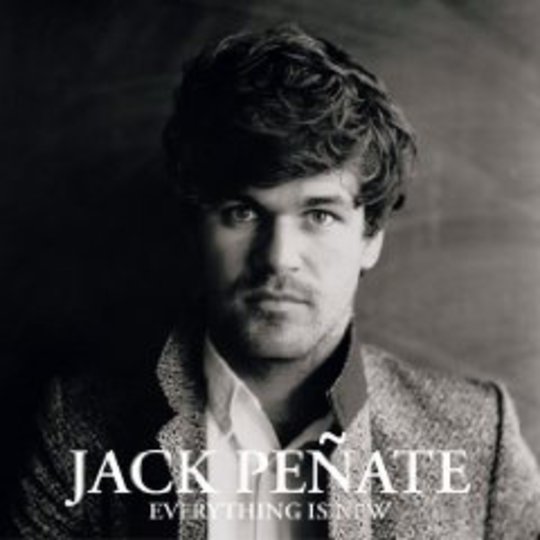 Jack Peñate's record label XL have had a little bit of a dig at his debut, Matinée. The blurb that accompanies the promotional release of follow up Everything Is New describes the Peñate who made 2007's top ten debut album as a 'kid,' producing 'good stuff, but not stirring, take-your-head-off stuff.' The first record was immature, they say, the new one is inspired by the lo-fi krautrock, Philly soul, bashment and reggaeton movements.

The label hierarchy couldn't have been that disgruntled. Reaching number seven in the charts and going gold is hardly a let down for an act that would normally make a polite impression on MySpace before disappearing almost entirely from memory. While the majority of Matinée's reviews suggest that disappearing from memory may not have been such a bad career move for poor ol' Jack (DiS served up a stinging 3/10 pummelling), anyone with any kind of musical instinct will have been able to presage its follow up.

Unsurprisingly, Everything Is New isn't really that new. XL stuck with Peñate because, whether they'd care to admit it or not, they knew that anyone capable of penning songs as close to pop perfection as the first record's 'Torn On The Platform' and 'Second, Minute Or Hour' is equally capable of doing so again. And let's face it, Peñate was always going to move on from the giddy, breakneck rockabilly of Matinée. With Everything Is New, he dispenses with that genre, and in its place is, err, Brazilian Tropicália! Now, before you switch off quicker than Oasis at Heaton Park, Peñate's unlikely genre-hop ends up rather suiting the former South London scenester. With the pace slowed slightly, the baselines more appreciable and the melodies still as sweet as ever, Everything Is New is more a natural progression than a complete transformation.

It's pretty easy to forget that Peñate is still in his early 20s. Yet many of his critics seemed to expect the finished, polished article from day one. However, with the new album comes the sense that Peñate has had to forcibly mature for the good of his own career. It's as though he thought it wise to inculcate his music with themes of maturity rather than taking the more conventional, more organic route. Cynicism aside, the album's grown-up, melancholic moments do work well and give the album some shade from the almost constant glare of South American sun. On 'Every Glance', Peñate summarises his growing pains: “Take your hands off my shoulders and let me stand / I've been trying my hardest to be a man.” The soulful 'Body Down,' as the title might suggest, describes a day at the cemetery and closes the album with a surprisingly reflective tone.

Despite its occasional lulls, the majority of the record spends its time making you dance, clap and sing along. Guilty pleasures these may be, but grey summers and rainy festivals need the occasional ray of sunshine, manufactured or not. Due to the album's relative brevity, there aren't really any dud tracks here. 'Pull My Heart Away' opens with a seductive and summery humidity – an atmosphere that lingers throughout. The influence of Peñate's mate, Norman Cook, and producer, Paul Epworth is clear from the start.

The beats are big and bulbous, and female backing singers and a good dose of reverb help to create a beefier, more atmospheric sound. The album's singles, 'Tonight's Today' and 'Be The One,' certainly benefit from a great deal of post-production sheen, and while neither host troubling metaphorical complexities for the listener to unravel, they will elicit smiles on even the most miserable faces. 'So Near' and 'Give Yourself Away' both exhibit the poppier sensibilities of The Housemartins and even, dare i say it, The Cure. Peñate's high-pitched croon isn't so far removed from Robert Smith's.

A little less wet behind the ears, Peñate has been through quite a lot since Matinée. He's experienced relationship breakdown, he's flown the family nest and he's spent time pondering over his and others' mortality. In other words, he's a man now, my son (or something like that). With a greater use of the minor key, he's added flecks of sentiment to what is, predominantly, a very solid pop record. Just don't get bogged down in genre compartmentalisation. This isn't lo-fi krautrock this or soulful jazz that. Despite the tropical flourishes, Jack Peñate has simply returned with another chart-friendly pop album, and XL are unlikely to have any complaints about that.