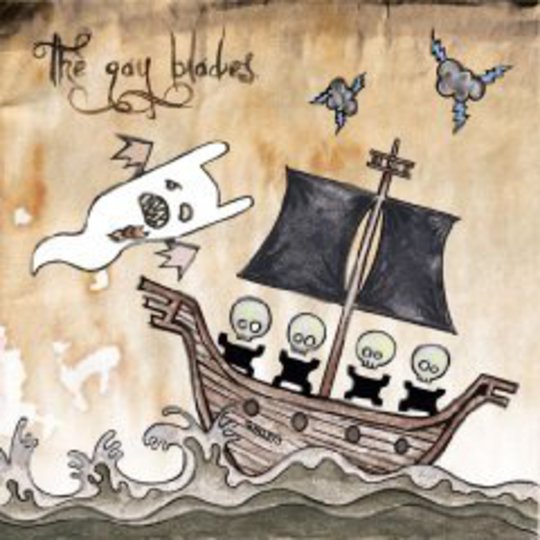 I really, really don't envy The Gay Blades. The New York duo has somehow managed to get stuck with a bunch of big name comparisons, links that won't fade quickly if you don't live up to the benchmark. They've been hit with comparisons to Bowie, Freddie Mercury, Mott The Hoople, The Sweet, and T-Rex. Pretty much every glam band you could think of. And on top of all that, to chose a name that references Lou Reed and name a song 'Bob Dylan's 115th Nightmare'; it's gutsy, wearing their record collection on their sleeves. But that's the basis of The Gay Blades: they've got swagger for miles and all the gusto of a 25-year-old man-boy who just moved out of his mom's pad. After an impressive showing at SXSW 2009 - and six plus shows in four days is overwhelming - The Gay Blades have re-released their debut album, Ghost', in the US and released it for the first time in the UK on Something in Construction.

The Gay Blades are notorious for being funny, over-the-top guys. I believe that. They've got a ridiculous band name, they've got the goofy nicknames, they've got the reputation for a romp'n'stomp live show. They're purported to be these awesome dudes who've got the kind of bravado and wit to crush those annoying, omnipresent hipsters who just don't get their (self-named, by the way) brand of trash pop. And it's true; they have made their success in blending personality with music, interacting with audiences, and of course (man-boy favorite) pranks. But if it all comes together disastrously in album form, does any of it matter?

Of course, the answer is 'no'. There are some high points on Ghosts for sure. 'O Shot', the opening track, is as advertised: dirty and skanky, the riff's got an attitude, and it's right to the point, coming in at just under three minutes. It would be a kind of rallying point for the album, if the rest of the record followed the same path. Unfortunately, it's followed by 'Bob Dylan's 115th Nightmare' which ... really falls flat. The first 20 seconds seem like it's going to be a corker: you know I was really hoping that it would have some of the same whimsy that went into the original Dylan song. Or at least that it might be kind of a wink-wink, elbow-elbow nod to Dylan, something witty or playful - but at the very least it's got to be better than marginal, which is how it ends up. Perhaps I am biased, for "Bob Dylan's 115th Dream" is one of my favorite Dylan songs. Clark Westfield's voice is really the straw that broke the camel's back. He's got a strong voice but in almost every track his voice takes on a quality I can only identify as emo. It's got the same weird, wavering quality that the dude from Panic At The Disco's got. There's nothing really quirky about it at all, nothing remarkable. And while he can carry a tune and he's got solid pitch, it comes across like anything off of whichever alterna-rock station is popular these days. It's really very noticeable in 'B.D's 115th Nightmare' and continues on almost every subsequent song.

The middle tracks off Ghosts are by and large throwaway. 'Hey She Say' is bland Fall Out Boy rock. But (and that's a big but) 'Dog Day Afternoon' is the one shining light on this album. It's more melodic; it's even euphonious by the rest of the album's standards. It's not without flaws, though, as Westfield does go off on an emo-vocal tangent with some extended "oh-oh's" but this tale of white lies and heartbreak is surely the only contender for song of the album. The ending, with Clark's vocals breaking down into random noises and the guitar fuzzing in the background is the only moment that I understood the music, and the humor behind it. Most of the time it just misses the mark because there is no subtlety to this record. Or it mainly comes off as insufferable, casual arrogance. It's incredibly odd that a band that can 'span many genres' would put out an album that is so banal and monotonous. Their brand of trash pop is bush league. The songs that are supposed to be the shining stars (i.e. 'Robots Can Fuck Your Shit Up' and 'Compliments Can Kill') just read Warped Tour, alterna-radio 'hit', and FOB rock. 'Compliments Can Kill' is the lowest point on the album. It's cliché, it's commonplace. I could go on and on about a song that has "boys will be boys will be so mean / and then girls will be girls will be so shallow" sung in Westfield's signature histrionic delivery... it's cringe-worthy.

Ghosts is not a valiant effort. Without the back line of humor or silliness, the songs just come off far too serious, even tedious, their brashness not translating to record in any way. They end up sounding almost domineering. But really, at the end of the day 'Ghosts' is a completely mediocre record. It's got high-points, it's got low points, but really it just falls into a disagreeable, insufficient medium. At the best of times it's only good enough to forget that you're listening to it.