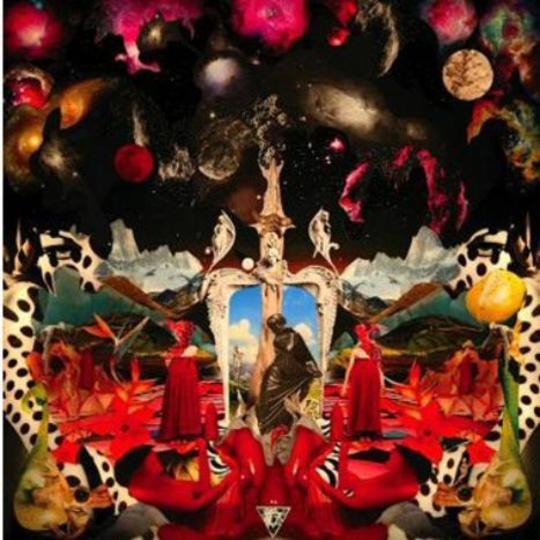 For some time now, Brooklyn's Amazing Baby have had a reputation based on who they know rather than their musical accomplishments. Never averse to dropping the odd name or two, their close association with the likes of MGMT and Chairlift was always going to stand them in good stead, at least so far as gaining a foothold of credibility before a note of music was heard at any rate. This, coupled with their initial appearance on the UK scene, thrust as some cathartic diffusion of the Manson Family and the Brian Jonestown Massacre with better cheekbones and hair, certainly assured a degree of pin-up status, even if it raised question marks over the overall substance of their output. All this, remember, came before barely a note had been devoured this side of Manhattan Bridge.

Quite frankly, Rewild would be easier to dismiss than acclaim; if anything, it's almost a given that many serious music devotees will even attempt to take this record or the band that created it seriously. Well, having seen Amazing Baby literally tear the roof off Brighton's Queens Hotel last month, this album has genuinely been on my wishlist ever since. While not quite achieving the stellar-like proportions their ambitions dictate, and for all the bravado and assertion that Rewild would "blow people's minds", it certainly never ceases trying, and only just falls short due to the occasional schizoid bout of self-indulgence here and there.

What Amazing Baby have managed to achieve in no uncertain terms is fuse together a vast array of influences into one smouldering cauldron and come up sounding like nothing else on planet Earth. Either the five individuals who make up the band are essentially music shop geeks steeped in encyclopaedic knowledge of every genre since The Beatles turned rock and roll's missive inside out, or they're fortunate to originate from such well-versed genes. Whatever the case, Amazing Baby take all kinds of inspiration from the past and manage to transcend it into a futuristic, sonic assault all of their own.

Sure, some of the reference points may veer a tad on the cliched side; opener 'Bayonets' probably mentions the kids being alright, getting high and the brown stuff half a dozen times more than is necessary, while the Eastern sounding 'Roverfrenz' possibly ingested too much MDMA off the mixing desk, its lysergic cry to make love falling flat by the time yet another elongated guitar solo punctures the chorus in two.

Nevertheless, those two moments withstanding, the other nine pieces of Rewild fit together like an aural collage, never once holding back for fear of reprisals from the Constabulary of Genre Boundary Trespass, while sounding at times as though parts of this record could have been assimilated into any one of the current or previous four decades beforehand. 'Invisible Place' has a Wish You Were Here-era Pink Floyd feel about it, all shimmering guitars and hazey vocal pronunciations, while the post-rave comedown of 'Deerripper' could be MGMT with louder amps in a parallel universe, and more to the point what Kasabian's 'Fire' would have sounded like had its creators possessed any genuine talent or... fire.

Elsewhere, live favourite 'The Narwhal' feels like T Rex covering The Wonder Stuff's 'Song Without An End', 'Kankra' borrows Kevin Shields' dichotomy on making the sweetest pop song become an unholy barrage of chainsaw-induced noise at the drop of a chorus, while 'Old Tricks In Hell' goes halfway towards discovering what Pulp would have sounded like had Jarvis Cocker et al been drawn into the meandering creations of Jon Anderson and Rick Wakeman rather than quintessential romanticism of Scott Walker and Jacques Brel.

All of the time, Will Roan's vocal proves to be the most engaging aspect of Rewild, even at its least explosive. Although some cynics will undoubtedly say that such a deluge of reference points doesn't help Amazing Baby establish an identity of their own, there is a prevailing sense of devilish satisfaction here that in reshaping bits of the past they've somehow created a dazzling spectrum of oddities that belong in the future. A triumph then, even if only to show that attaining a sizeable victory from the jaws of defeat isn't such an impossible dream after all.