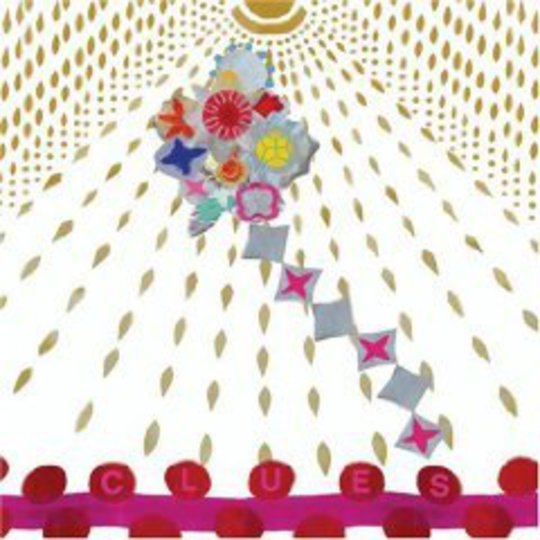 Since the windmilling demise of The Unicorns in late 2004 and main fringe-flicker-asider Nick Thorburn’s subsequent re-emergence with the similarly lauded Islands, it’s always seemed fairly natural to assume that he probably had both hands on the tiller throughout most of his first band’s tragically mayfly-esque lifespan.

Then, like that fraudulent canoe death bloke waltzing back in from beyond the ‘grave’ after five years missing in action, Unicorns co-pilot Alden Penner saunters nonchalantly in through the back door and coquettishly tosses this new Clues record down on the table. All of a sudden, we find ourselves agonisingly unpicking the stitches in the giant suppurating wounds left when The Unicorns’ graceless death throes skewered our fragile hearts with loveably misshapen horns. Penner, you vicious bastard - we’d just about managed to stop all the mawkish sighing and move on with our lives. AND NOW THIS.

Of course, it wasn’t anything like as much of a ‘here today, dead tomorrow’ story as all that. Far from paddling off into the post-Unicorns sunset on a kayak made of fail, Penner has casually dabbled in solo effort All Makes Parts & Collision while continuing to nick various credits with fellow Montreal noise ensembles in the meantime. Staying reasonably well connected on the local scene has clearly paid dividends, as the drummer on Clues is none other than Penner’s villavillanola.com cohort and former Arcade Fire beatmaker Brendan Reed.

Despite Reed’s presence, those of you who enjoy mining for ex-band influences won’t be digging up many fossilised remains of the primitive Arcade Fire here. On the other hand, as we’ve already established, Clues does sound a LOT like _Who Will Cut Our Hair When We’re Gone?_, effectively The Unicorns’ only fully-fledged LP release during their brief, meteor-like streak across the indie firmament.

The rush of familiarity comes as a bit of a shock at first: trying to review Clues initially felt like cowering under fluorescent strip lighting beside a mortuary slab as the sheet was whipped back, nodding numbly to identify the body of a loved one and then galloping out to the car park to throw up. Which was probably a slight overreaction to a fairly benign wonk-rock album, in retrospect - especially one whose occasional traces of vague ghoulishness, while very discernible, are far more Hallowe’en party than coroner’s office.

For, as was WWCOHWWG? before it, Clues is an album peppered with wilfully oblique lyrical flights into the fantastical, the farcical and the downright otherworldly. _"Approach the throne, throw away your skin,"_ implores Penner in the opening lines of early stand-out 'Approach The Throne', a rollicking dirge that scampers raggedly through an echoing network of reverb-drenched subterranean caverns, pursued by the dull thudding of palm-muted power chords and a faintly eerie chanted refrain. It’s the closest thing 2009 has thus far yielded to an alt.rock reimagining of ‘In The Hall Of The Mountain King’. And against all the odds, the effect is oddly thrilling.

This is one of several outbreaks of edgy atmospherics on an album nevertheless dominated by an oh-so-Unicorns tendency towards barely-anchored whimsy. The latter bleeds into Penner’s song structures as it much as it does his (frequently batshit mental) lyrics: both the staggered ebb-flow incantations of 'Remember Severed Head', and the reimagining of it as a Tom Waits-circa-Swordfishtrombones-era pots-and-pans clatter that launches final third highlight 'Cave Mouth', evolve in numerous distinct chapters despite their sub-four-minute run times.

With each successive movement, Clues buffets and soothes, ushering a diverse if not masssively coherent identity parade of ideas past in single file. The effect is somewhat disorientating: by seven or eight tracks in, you’re not entirely sure whether you’ve accidentally been listening on shuffle, or continuous loop, or even repeat. The whole thing is straggling, alternately dense and patchy, snagging and smooth - in a way, listening to the whole thing through in one sitting feels a bit like being lost in a poorly-maintained hedge maze at night, with just the sputtering flashlight beam of Penner’s reed-thin vocal to guide you out.

Indeed, it’s somewhat darker beast throughout than you might’ve expected Thorburn’s preternaturally high-voiced chum to be bouncing back with, but bounce back he most certainly has. Sure, Clues is rag-tag in the extreme. Sure, it feels...well, not less than the sum of its parts, exactly, but very much as though there’s largely unexplored territory here begging to be charted - the one tantalising whiff of Arcade Fire pomp, at the pounding heart of mid-album slow-burner 'You Have My Eyes Now', suggests it’s a direction they might want to explore further in future.

For the meantime, though, Clues offer precisely that: hints at considerable future potential, and, for any budding gumshoes keen to probe the mysterious fate of The Unicorns, arguably something of smoking gun.