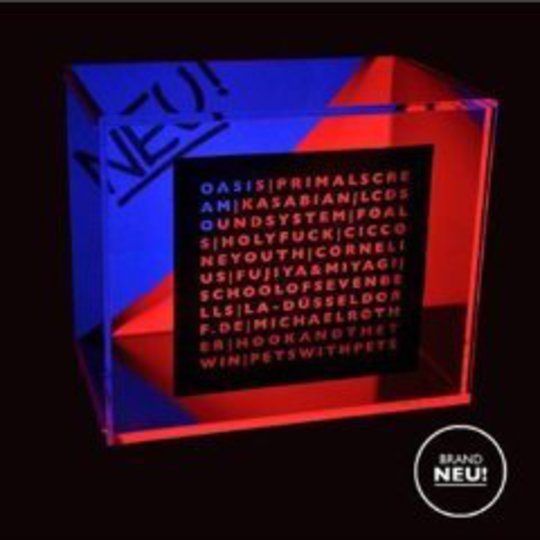 By far the best recommendation you can give to this idiotically-conceived artefact is that it’ll probably really piss off Krautrock obsessives. Not that I know any Krautrock obsessives – they seem to lurk in the more foetid corners of websites, arguing about concerts they didn’t go to in the Seventies – but in dangling the last ever recording made by late Neu! drummer Klaus Dinger (La Dusseldorf’s ‘Sketch 1 08’ - it sounds kind of, um, college rock), but first forcing listeners to endure excretions from the likes of Oasis and Kasabian, then perhaps the complier of Brand Neu! is saying one of two things, both of which can be imagined to be delivered in the voice of that mean guy with cancer from Saw.

He could be saying ”hey Kraut-nerd, look at this: I’ve made you buy music you hate just to make you grub in the mire like the nasty little completist you are”.

Or he could be saying ”listen to this song by Oasis – it’s no better than the musical form you have given up the chance to have children that will love you for. You hear? NO BETTER”.

Anyway, a track-for-track evaluation of Brand Neu! could easily descend into a weary rehurling of insults in the general direction of Oasis’s ‘I Can See It Now’ and Kasabian’s ‘Stuntman’ – like all songs by those bands, they’re not really that offensive, but will bring roughly as much delight into your life as the discovery of a crushed earwig on your pillow – while getting bogged down in the fact that several tracks are actually pretty good, notably (if not surprisingly) Michal Rother’s elegant 'Neutronics 98', originally released on 2001's infinitely more worthwhile A Homage To Neu!

A deaf idiot child making a mixtape for their dead imaginary friend could tell you whacking a onetime cathartic closing epic as track two is a pretty dud move, and Primal Scream’s ‘Shoot Speed / Kill Light’ doesn’t work nearly so well here as it does as the final shattering through the pain barrier at the conclusion of XTRMNTR. But y’know, it’s still ‘Shoot Speed / Kill Light’, just as Holy Fuck’s ‘Super Inuit’ is still Holy Fuck’s ‘Super Inuit’, LCD Soundsystem’s ‘Watch The Tapes’ is still LCD Sound System’s ‘Watch The Tapes’, blah blah blah. Let's not dispute that.

The thing is that other than the Saw-derived scenarios outlined above, it’s hard to see how this compilation serves any more purpose in this world than, say a spork, or a benign tumour. There is, one should be quite clear from the start, no Neu! here, only music deemed to have been on some level inspired by Krautrock/motorik. Thus the opportunity for a weak pun and the involvement of Neu! members (one dead) in the last two tracks aside, there is no earthly reason why this is any more a direct testament to Neu! than it is to Kraftwerk, Cluster, Harmonia or a myriad other bands. It’s a bit like sitting some unfortunate down with a shitty mix of rock songs and asking them what they’ve learnt about Robert Johnson.

Were it about breaking a new generation of Krauty bands, that would have been, y’know, a point to it all. Nestling amidst the headline-grabbing drek, we have unreleased turns from newbies Pets With Pets and Hook & The Twin, the former of whom are pretty good, albeit in a manner that makes you think: "oh yeah, and another thing wrong here - no Fall". In any case, the two plucky newcomers just seem lobbed in to make up the numbers, the compiler presumably being two celebrity friends short of a full house, with the The Horror's 'Sea Within A Sea' (aka the first Krautrock song in three decades to have even a splash of cultural import) glaring in its absence.

Were it about rarities, that might have been okay too. Sadly the only entirely exclusive track not thus far mentioned is School Of The Seven Bells’ ‘Device Fuer M’, a song that's several shades less exciting than a trip to IKEA. Billing Fujiya & Miyagi’s (admittedly awesome) ‘Electro Karaoke’ as a ‘rare track’ in the day and age of Spotify is not unakin to expecting somebody to be impressed that you’ve got milk in your fridge.

Basically Brand Neu! is a badly-made compilation that attempts to bolster its credibility beyond the common or garden (i.e. FREE) mixtape by vampirically invoking the spectre of the sort of band indie kids tend to feel guilty they don’t know more about. Or it’s simply designed as a way of pissing off Kraut fans. Whatever it is, it’s fucking annoying.