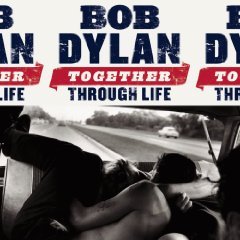 Bob Dylan - Together Through Life

Short of a few thousand words, there’s really no way to sum up the impact Bob Dylan has had on popular culture, so let’s just go with ´seismic´. On Together Through Life he sounds energised anew, the result constituting a focused, absorbing and on occasion, utterly lovely LP.»

bob dylan's new studio album 'together though life', produced by jack frost, was recorded late last year, prompted by the composition of a new song, 'life is hard,' which was written for a forthcoming film by french director oliver dahan (la vie en rose). the new album is the 46th release from bob dylan, and follows 2006's platinum album 'modern times', which debuted at number 1 on the billboard top 200 and reached the top of the charts in seven additional countries and the top 5 in 22 countries around the world. bob dylan's three previous studio albums have been universally hailed as among the best of his storied career, achieving new levels of commercial success and critical acclaim for the artist. the platinum-selling 'time out of mind' from 1997 earned multiple grammy awards, including album of the year, while 'love and theft' continued dylan's platinum streak and earned several grammy nominations and a statue for best.