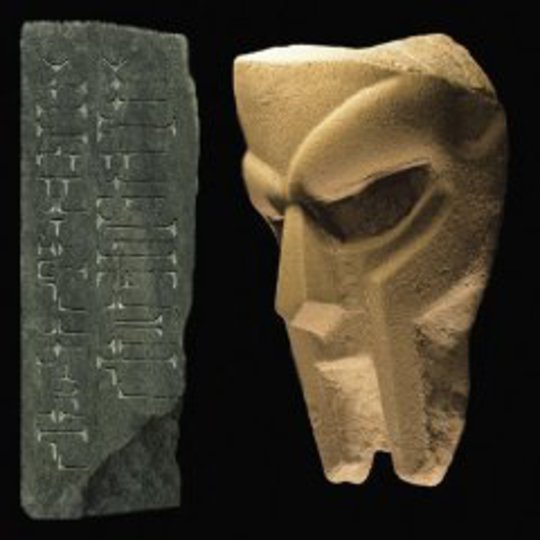 If it seems like an annoyingly long time since DOOM's (he dropped the MF in another act of re-baptism) last release, it's because it is. Four years have passed since the collaborative concept toon-attack DangerDoom and his last skit-laced solo effort, MM Food, came in 2004. Since that the world of hip-hop has mourned the death of J Dilla and seen the propagation of ghastly auto-tune. America elected its first black president, too. Throughout all of this, rumours of DOOM's death and disappearance persisted. Thankfully that turned out to be just part of the hype. Some things never change, though; he's still insistent on ALL CAPS when you write his name.

There are two masks DOOM has fixed to his face over the years. One is the cartoonish incarnation seen in DangerDoom and MM Food, both albums with whimsical rhymes which are often outright comedic. A whole album dedicated to freak-out late-night cult 'toons? Sure, for DOOM it's no problem and a piece of piss. The alternative, more sinister side we've seen in the dark underworlds of Viktor Vaughn's Venomous and Vaudeville Villains and is the mood DOOM adopts for most of BORN LIKE THIS.. By the time Charles Bukowski makes an appearance, this mood hangs ominously.

The album takes its name from a line in 'Dinosauria, We', the afore-linked Bukowski poem ("we are born like this, into this, into hospitals that it's so expensive that it's cheaper to die. Into lawyers who charge so much it's cheaper to plead guilty"). It had not previously been a characteristic, but DOOM sounds almost angry during certain passages – maybe the talk of impostors stirred up his spirit into a comeback as he snarls out of his trademark irreverence. It's hardly what you'd call a political album, but there's certainly the odd trace of reference and opinion.

At first its beats, rhymes and references are almost a muddle, not unlike some of his more patchy skit-laden works. A fair assessment says that DOOM's more substantial records aren't self-produced, but there's enough here to dispel doubts, with DOOM twisting the knobs and dials on ten of the 17 tracks. High-profile collaborators like Madlib, Ghostface and Raekwon make appearances but they don't overwhelm or take the limelight. Raekwon – whose voice is almost indistinguishably similar to DOOM's – loans his larynx for the dystopian 'YESSIR!', whilst Ghostface whines his way through 'ANGELZ', on top of some equally straining, wailing strings and brass. One of Dilla's Donuts, 'LIGHTWORKS', provides ammunition for DOOM, spitting new life into an already faultless piece of work.

The reliance on sound-effects and skits will always divide opinion. Some may argue that extracts and 'distractions' like Bukowski ruin the continuity, while others might say they set the tone. Yet DOOM wouldn't be quite the comic-book villain without the comic-book references and skits.

To quote the man himself, the back end sucks – or at least it doesn't stack up favourably against 'RAP AMBUSH', 'LIGHTWORKS' and 'YESSIR!'. 'SUPERVILLAINZ' seems to be DOOM'S take on auto-tune, but it sure is a patience pusher. You'll do well to not turn this right off. After 'THAT'S THAT', it should have been exactly that, anything after is a headache-inducing mess which doesn't totally ruin, but certainly spoils the end product.

If DOOM ever uttered a line that applies to himself it's "don't believe the hyperbole", which he mutters on 'BALLSKIN'. He's right; don't believe it, just listen. There are flaws; themes don't always flow and at times threaten to fully disjoin and the final trio of tracks should have never made it within a mile of the final cut. When the mood is lightened it feels disorientating, too. Gripes aside, a good chunk of BORN LIKE THIS. shows an angrier, more cynical, and, hell, maybe even better DOOM. A day may come when the mask starts to rust but it's not just yet.