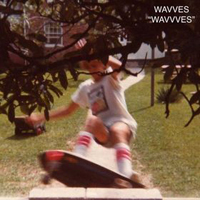 There's enough here to suggest Nathan Williams has the potential to become a very special talent indeed in the none too distant future...»

the whirlwind of hype swirling around 22-year-old nathan william's bedroom-punk project wavves is unmatched in recent years. although williams has only a scant number of live shows on his rsum, he's already booked several national dates, closely followed by a month-long european tour. since releasing wavves' self-titled debut lp late last year, williams went from little-known to minor phenomenon in less than six months. originally planned for release on the small minneapolis label de stijl, his second lp 'wavvves' has been picked up by fat possum. when not watching cops or drinking 40s in the park, nathan daniel william blogs on classic rap and records waves and waves of effortlessly great slack / crust / beach / punk compressed onto four-track cassette in his san diego bedroom. wavves exemplify every pastiche of what anyone in their mid-20s has been through musically and, somehow, some that they have not. how tunes written by a 22-year-old can evoke boyish reverie and reverence of thoughtful nostalgia is anyone's guess, but that's the sound of today's american youth! it's a new day rising and as the wavves get higher, they gotta converge. you can choose to stay down in the curl, but if you follow the winner, we can meet up on the crest. ....release date: 01/06/2009
Description from RoughTrade.com