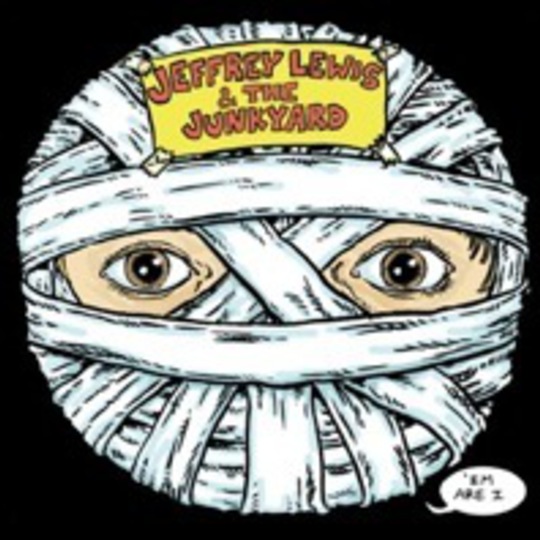 We all know everything about Jeffrey Lewis. It’s all there in his music – no stone left unturned in his relentless quest to be completely open and honest about every aspect of his life. Artistic insecurity? Check (the inimitable ‘Williamsburg Will Oldham Horror’). Sexual insecurity? Check (‘The East River’ and many more). Erm, everything insecurity? Check (‘Anxiety Attack’). Lewis’s attempts to excavate and explore his neuroses are so startlingly lucid and hyperactive that it’s easy to caricature him as a kind of blend of Woody Guthrie and Woody Allen, a travelling poet dedicating paeans to pattern baldness rather than dust bowls.

Yet for all the partial accuracy of such a comparison, it overlooks the rest of Lewis’s output - he is, of course, as much comic-book writer as song-smith, his music existing in tandem with his drawings. Thus, just as his Fuff comic-strips contain short self-deprecating tales of private misery, so these little stories are part of a wider tapestry, sitting alongside b-movie zombie flicks, travelogues, and general existential musings. For every ‘Anxiety Attack’ there’s an ‘Alphabet’: like any great storyteller, Lewis is intent on focusing on the bigger picture, on giving both sides of the story. So his music can both break down into nervous exhaustion and philosophically proclaim: “we’re all parts of an alphabet…we’ve all got good things to do and it’s good when we do them”. Indeed, as Lewis himself explains here in a Newsnight interview regarding Watchmen, part of the appeal of comics themselves is their ability to cram detail and information, to document a wider spectrum of emotion and thought than other mediums.

Still, if Lewis’s last record of original material, City & Eastern Songs, was drenched in a manic urban claustrophobia (the title itself an appropriative reversal of ‘country & western’) that almost bordered on the cynical, 'Em Are I, despite many of its songs dating back to the same period, has a different feel. From the off, the record lunges straight into positive, humanist poetry, opener ‘Slogans’ a glorious, passionate Richard Hell-esque exploration of coping with the confusion of modern living, a world with “The Stones…The Beatles…Shoguns and Hulk Hogans”. The detail keeps coming thick and fast, ‘Roll Bus Roll’ depicting with delicate accuracy the life of the travelling musician, Lewis describing the scenes through his bus window (“old bodegas and old street lights / Harlem looks so warm tonight”) as well as their accompanying thoughts (“the sun setting on my youth makes that old shadow get taller / but it’s fine as long as the bus makes the city behind me get smaller and smaller”).

If perhaps before Lewis’s music had a tendency to be swamped by small-print, here the songs know when to step back, to give way to a catchy chorus or a hummable riff. ‘Broken Broken Broken Heart’ is the closest Lewis has come to writing a pop song, complete with sing-a-long chorus and handclaps; he sounds like a frailer Lou Reed, stripped of mystery, appreciating hurt (“thank you pain”) rather than revelling in it. Moreover, ‘Em Are I comes closer than any of Lewis’s previous albums to capturing the simple charm of the ‘low-budget films’ that light up his live sets. Characters like the pet pig in ‘Good Old Pig, Gone To Avlon’ are imbued with a clarity of purpose that Lewis’s image of himself clearly lacks; the closing track ‘Mini-Moocher…’, with its swirling, Yo La Tengo psychedelia, directly compares the Lewis-narrator, surrounded by New York’s “bodies whose names I don’t know” and who “just keeps falling further”, with “Mini The Moocher from the future” who “could turn space into whatever kind of face would suit ya”.

There’s undeniably something tragic about the disparity between Lewis’s fantasy world, where the restraints of time and space vanish, and his metropolitan reality, where they affect everything. Yet on ‘Em Are I, maybe more so than before, Lewis is able to reconcile the two – ‘If Life Exists?’ posits death as a mystery box: it’s our inability to know the future, to really control our destiny that makes life exciting. Moreover, he explains, it’s art that both best captures this dizzying uncertainty (“it’s hard to get too bored / when you pick the right two chords / and you keep on strumming / as if you don’t know what’s coming”), and helps us deal with it. On ‘Slogans’ we’re told that “now that I’ve got it all on tape / I can really figure out its shape”. ‘Em Are I explains that it’s all relative, neither the cartoon character nor the philosopher has the answer; to quote Woody Allen: “I read Socrates. This guy knocked off little Greek boys.” The beauty is that there is no real answer, you just do the best you can.