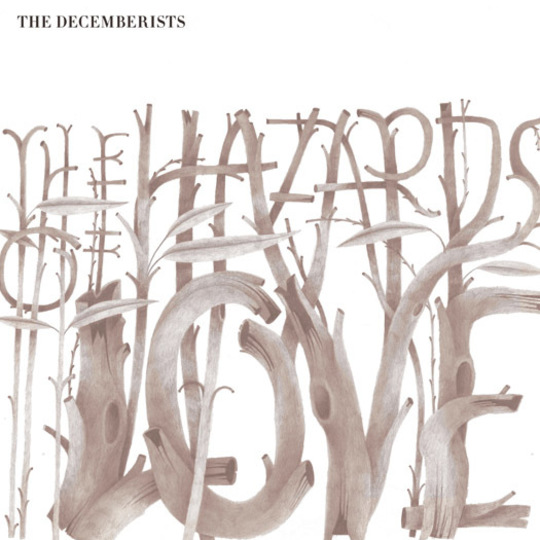 First thing’s first: the new Decemberists album is a rock-opera, rather than a rock-musical, and before you say “so what?” – it has to be stressed that’s a good thing. That’s to say, the dialogue is all sung, we don’t get clumsily inserted passages of plot development, and there are plenty of singalong moments – arguably more so than ever before. (You could probably listen to this on shuffle-mode quite happily, although it’s sequenced for mounting tension, a 14-minute / four-song suite to close, and strategic reprises of the leitmotif, whether or not you’re following the plot unfolding in the lyrics.) Generally, being a rock-opera (rather than “opera-opera”) doesn’t preclude bursts of silly genre pastiche (to express through music the characters of the heroine, the antagonist, the fifth business, whoever), but in Colin Meloy’s case, the style is vintage hard rock throughout (derived from Maiden, Sabbath, Floyd, whoever), and variation-qua-characterization means that the songs are either led by electric guitars, acoustic guitars, or harpsichords, and sometimes accompanied by strings and/or children’s choirs.

Does it work? Well, Yes, and it does so on several counts. Anyone who loved The Crane Wife (with its own embedded narrative, and two tracks clearing the 10-minute mark) is barely going to notice the difference, and longer-term Decemberists fans should know from ‘The Tain’ EP that Meloy’s had plenty of practice. Importantly, too, this could actually bring in more fans than ever before, because the constraints of the rock-opera mean that Meloy’s writing some of his simplest, most immediately affecting songs. Musically, it’s Maiden/Sabbath/Floyd, without quite reaching the melodic complexity of Led Zep/Queen, because Meloy’s shooting for riffs that can stand being played for five minutes at a stretch. (Incidentally, Meloy took the album-title from a 1966 EP by Anne Briggs, best known for being covered by Led Zeppelin). Think also A Night at the Opera (1975) for the lesser known songs by Brian May (folk-ballad '39' and bombastic-as-it-sounds 'The Prophet's Song'), if that means anything to you. In the final suite, everyone should be thinking ‘Another Brick in the Wall, pt. 2’ (for the use of a considerably less irritating children’s choir), maybe ‘Comfortably Numb’ (also from 1979’s The Wall), and certainly busking-classic ‘Wish you were here’ (1975 again…). These echoes are inevitable because rock-opera’s all about pushing the right buttons with tried and trusted chord progressions; plus, Meloy’s anglophilia serves him well. (Would you want to hear a 21st century revival of Todd Rundgren or Frank Zappa, emulating their noodliness?!)

You may have guessed by now that the narrative’s not much to write home about. True – it’s standard folkloric opera-fare; young Margaret is crossed by "The Rake", there’s a period of exile, a royal intervention, captivity, and so on. What’s important is that (unlike ‘Pinball Wizard’ from The Who’s otherwise execrable Tommy), the narrative doesn’t get in the way of the tunes, and the choruses are pretty versatile as anthems go. In particular, Shara Worden AKA My Brightest Diamond is a superb female foil to Colin Meloy, and other guests (Jim James, Becky Stark from Lavender Diamond, Robyn Hitchcock) are surprisingly unobtrusive, although that may be a testament to the high standard. The actual highlights are ‘Hazards of Love, pt. 2’, ‘The Wanting Comes in Waves’, a beautiful bit of fingerpicking in ‘An Interlude’, ‘The Abduction of Margaret’, but you’ll want to listen to the whole thing, and who knows – maybe the story will prove to be a grower.