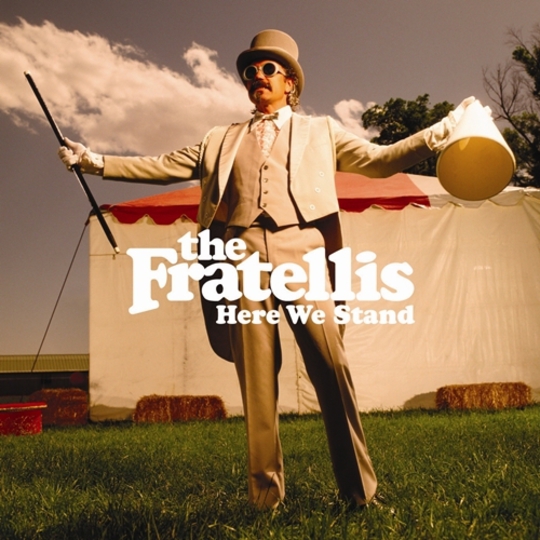 The Fratellis are Supergrass doing Chaz & Dave – perky popsters swaggering their way into the hearts of idiots whose idea of a top night out is eight Stellas and a greasy kebab, swiftly followed by either a) a scrap or b) collapsing in a pool of their own making on a stranger’s driveway. Or both. Ideally both.

Actually, scratch that opening gambit. Neither Supergrass nor the Cockney sing-along souls have ever been responsible for singles as overwhelmingly inane as ‘Mistress Mabel’, this record’s lead off-cut. It is appalling, the worst kind of revivalist Britpop shite that no band should be allowed to unleash unto the masses. How it even climbed to number 23 – disappointing for a band who’ve previously graced the top five – is beyond me. Perhaps the drunkard dullards buying the fuck out of debut LP Costello Music have wised up. Or, not. As this album is presently sitting pretty in the top five of the albums chart.

So, the time comes to analyse the hows and whys. How: ‘Chelsea Dagger’, the Scottish trio’s most ubiquitous effort to date, infecting all and sundry with its “nah nah nah”ing… or its “doo doo doo”ing. Whatever the xxxing, it’s one of those staples of daytime radio, across the board as good as, that’ll perhaps never go out of rotation. Why: because people are stupid, really really really stupid. You know this; it’s why you’re here and not reading some trash about Lily Allen’s breasts or Guns N’ Roses’ latest fart of activity… oh… but you get my point, right? There is right, and there is wrong. And so very many people heading to HMV each weekend are wrong.

Here We Stand offends, such is its banality. Frontman Jon had told DiS that little on the band’s second would sound too like its lead single, but if he truly believed that then it’s clear the man’s depth of taste, his knowledge of music in its myriad forms, is shallow beyond belief. Formula is strictly adhered to, and while pace may differ from one jolly strum-about to the next, the void where there should be a worthwhile tune remains. ‘Jesus Stole My Baby’ plods with as much purpose as an environmentalist’s best efforts to halt the melting of our icecaps; I’m sure the band mean well when they’re laying down lines about the departure of their beloved (I’m sure it’s more to do with her no longer putting out than, y’know, properly finding God, but whatever – ambiguity is rife when meaninglessness abounds), but their execution is drearily tiresome. And so it continues…

‘My Friend John’ would have my _friend John pulling teeth – he’s a broad-minded man when it comes to music, but this deathly insipid opener would destroy his opinion that everything has a place, every song deserves an audience. “This is where I’d quote a lyric conveying the song’s hideousness, but to pick one from many is just too tough.” ‘Shameless’ contains a telling line, though: “I’m so sick of hearing how your love for this has died”. Best pick up some Rennies, lads, because hopefully nobody’s quite done telling The Fratellis that they’ve flogged this horse beyond the grave. The sole saving grace of _Here We Stand is ‘Stragglers Moon’, which twinkles and chimes in an oddly proggy fashion without going all-out Kula Shaker, quite. But one track does not an album make (and it’s not that good, anyway; everything’s relative).

Stupid people will, one day, inherit the Earth. It’s happening, all around us; every day we read stories about certain institutions being dumbed down. As music moves on its merry way through history, we see devolution in effect: from Chopin to The Ting Tings, this is not progression, friends. We are witnessing that which stokes the fires in our bellies gradually turning to shit. That’s why you’re here, though, because you recognise that there are still treasures to be found. Diamonds in the dirt. And if you’re of the opinion that Here We Stand is a glittering treat for the senses?

You’re stupid, you’re wrong, and you stink of shit from wading around in it for so long. Fuck off.