Waited Up 'Til It Was Light 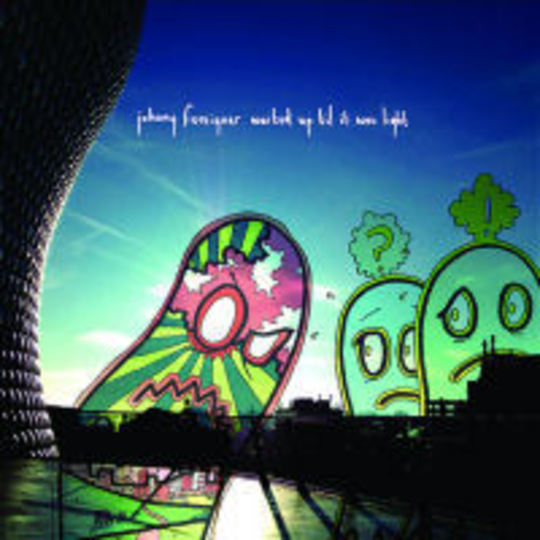 With lesser songs to call his own *Johnny Foreigner *vocalist Alexei Berrow would struggle to tempt the average listener through even three of the thirteen tracks that make up this debut album proper after last year’s Arcs Across The City EP. His shrill shrieks, at times matched wince for wince by back-up screamer Kelly Southern, a bassist likely to be a fixture on the bedroom walls of indie kids too young to have caught Melissa Auf der Mar or Charlotte Hatherley a few years back, are an acquired taste to say the least; some will flee as he crams syllables too many into a timeframe too short. Those that last the length, though, will be rewarded handsomely.

Like many music lovers unable to keep perfect pace with the ever-shifting landscape of the British underground, I was first alerted to the potential of Johnny Foreigner – affectionately known by fans, and certain DiS staffers, as JoFo, and so they shall be henceforth here – by this site’s review of Arcs Across The City (find it here). Ten out of tens are rightly rare, and while I couldn’t agree wholly with the perfect score after sampling the seven-tracker for myself, there was no denying its positives: once the barrier of that voice is broken down, one swiftly realises the excellent songwriting in action, the masterful combining of avant-indie guitar tendencies with immediate pop hooks the size of battering rams (and possessing all the subtlety). Clearly JoFo have influences that most mainstream radio listeners will never have heard of, but by manipulating these touchstones into manageable portions of frenzied riffing and fret twiddling they’ve successfully made their own material hugely accessible.

A couple of Arcs tracks make the jump from short-play release to fully formed album: ‘The End and Everything After’, essentially the opening to Harvey Danger’s ‘Flagpole Sitta’ given the once over by indie-punks super short of attention spans, is characterised (as so many of these songs are) by Berrow’s breathless diatribes, Southern chipping in to add a little sweetness to shout-along chants of “God knows what you think of us”. Throughout, third member Junior, drummer and keys, provides an essential backbone to proceedings; without this anchor of sorts, chances are the furious guitar lines would run riot entirely out of control. JoFo would display the necessary energy but lack the even more vital pop nuances. The band is, clearly, far more than the simple sum of its parts.

The other EP song to progress to this LP is ‘Yes! You Talk To Fast’, again opened by guitar work that’s impressive of pace but controlled by some propulsive drum pummelling. What Berrow is actually on about – pirates are mentioned, and there’s a decent “yo ho ho!” in there – is anyone’s guess (it’s their Blues Brothers song according to our Track-by-Track - Ed) but there’s a naggingly addictive edge to it, ensuring the song’s one of many here that firmly bed themselves into the grey matter after but a week in the album’s company. Of a similarly speedy execution are album-preceding singles ‘Our Bi-Polar Friends’ and ‘Eyes Wide Terrified’, although both also display a tenderness not always evident on JoFo’s wilder arrangements. The latter, in particular, is notable for its softly sung opening 30 seconds – a chance for Berrow to take a breath proper prior to launching into the band’s formulaic – that’s not meant in a disrespectful sense – structure of verse, chorus, verse, scream a lot.

In the album’s middle section sit two of its true standouts, ‘Hennings Favourite’ (should that have an apostrophe? It doesn’t here…) and ‘Salt, Pepa and Spinderella’. The first is in the vein of much that surrounds it – bombast and bluster, squeals and screams – but latches a sizeable motif that recalls Minus The Bear’s experimental pop-rock meanderings to a structure that’s already considerably memorable. The result is a track that’s both weirdly alien and infectious like the finest Girls Aloud offering, a song that knows not its place in the genre scheme of things. ‘Salt…’ might be named after a popular hip-hop group, but it’s sure as hell not a rap number. Rather, it rides a pulsing keys ‘n’ beats intro which Southern and Berrow vocally joust across the top of before tripping into a spoken-word tirade from our frontman. Everything’s weirdly tranquil until two minutes and six seconds in, and then: bang. Everything’s rocked up to eleven, Southern’s repeated “do-do-do”s seeping into the bloodstream. Addiction to JoFo comes easy, then, given just the right amount of exposure.

Which is, by my reckoning, roughly three and a half plays of this debut album, a record that shows other sides to this band’s personality – ‘DJs Get Doubts’ is a sweet paean to the touring life, while many lyrics relate to events unfolding in their hometown of Birmingham; ‘Cranes And Cranes And Cranes And Cranes’ shouts its fuck-yous the way of developers destroying England’s second city’s cultural draws to erect housing blocks – without ever allowing them to stray too far from the source: the yelp-at-home histrionic rock ‘n’ roll that’s already won over legions of admirers. Me, I’m another recruit to the campaign – given touring enough, and a little radio luck, it’s impossible to imagine Johnny Foreigner not becoming a household name.

Not with the parents, you understand; even I’m almost too old for this sort of passionate squall. No, the kids: it’s the kids who are going to make sure Johnny Foreigner matter for the foreseeable future. So long as they’re dancing to songs as near perfect of pop-rock shape and size as these, the world is a better place. Waited Up ‘Til It Was Light is an album of escapism, of sorts: sweat your troubles away, guys, because tomorrow’s another day and we can all deal with that shit then. It’s no 10/10 – to award such a mark for a debut album would be to ask the band to call it quits, as they’re unlikely to ever trump it – but it is a definite contender, alongside Los Campesinos!’s Hold On Now, Youngster, Foals' 'Antidotes' and Wild Beasts’ forthcoming Limbo, Panto, for home-grown debut of the year.