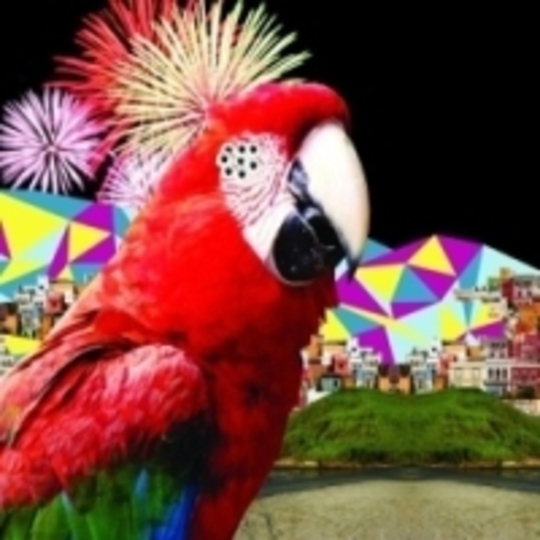 “I just wanted _Alegranza to be a space age-exotica kind of record. Like Martin Denny, Esquivel, Attilo Mineo, Arthur Lyman, Jimmie Haskell and all that. The kind of record you play and it makes you feel like travelling to all these places but never stopping at one and then finding an empty space in the middle for you to get into it.”_ - Pablo Díaz-Reixa

Amid the sickening carousel chimes, tin-pan Tropicália and corroded dub, Alegranza leaps manically from one beaming influence to another, constantly shifting guises, knitting a comfortable coastal paradise. Reminiscent of Panda Bear’s pursuits on the Portuguese coast with Person Pitch, Pablo Díaz-Reixa’s debut outing was recorded off the lapping Catalunyan shores and, as influences come colliding, manages to provide the same intoxicating carnival-esque procession for all to marvel at.

Sickening as it is captivating, as maddened chants gather round a familiar psychedelic wash, ‘Palamitos Park’ opens and el Guincho’s ambition to make a space-age exotica record suddenly seems realised as beats chime and chatter with an itching delirium as disorientating calypso hooks loop. ‘Antillas’ soon rolls in on events, indebted to the frenetic acid trip bop of Baltimore mainstay Animal Collective, Black Dice and Ariel Pink and their deranged frolics.

So set adrift though, Alegranza is difficult to pin down, picking at benga and bhangra in equal amounts, and seems its own odd spectacle. ‘Fata Morgans’ mutates from an unassuming calm to darting delirium with effortless ease as el Guincho’s signature rasping chants rear up throughout; familiar echoes impossible to place, music without a home.

Wilting with sunstroke, ‘Bueno Matrimonios Ahi Afuera’ and its stuttering military drum rolls offers a rare spot of calm before ‘Costa Paraíso’’s jittering beat interrupts and recalls the psychedelic psychosis of Os Mutantes. With retiring grace ‘Polca Mazurca’ is an appropriate comedown close following the festivities that have just passed by.

Out in glorious hyper-colour, Alegranza feels so beguilingly withdrawn from reality, a tropical idyll creeping ‘round repetitious routine like a friendly iguana cooling you in humid heat. Pieced together from bits of wreckage, this is music created in glorious isolation, drawing on its own influences to create something just as fresh and just as joyous; drifting out into the ocean on its own shonky raft.

Rough Trade had 25 copies available at the start of the week. Yum?