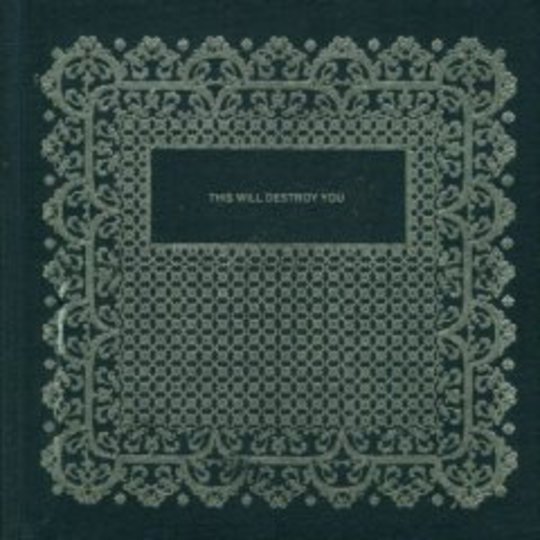 Relative newcomers on the post-rock block – and yes, that term is a necessary evil here, so best to get it out of the way early doors – This Will Destroy You play out like something of a threat to Explosions In The Sky’s instrumental crown on paper: the foursome (natch) are from Texas (natch), and recorded this with EITS producer John Congleton (natch, thrice). So far, so so what, and fairly: more often than not purely instrumental rock acts suffer from setting written-word rhetorical precedents their output can’t shine a candle to. But this self-titled debut proper really is worthy of investigation beyond a cursory PR scan and the now obligatory Wikipedia scouring.

The follow-up to a collection of demo recordings regarded by some to be the band’s debut, titled Young Mountain, this eponymous offering presents seven tracks of sublimely slow-shifting sound floes; some tracks toe a conventional line in quiet/loud dynamics, traditional in the post-Mogwai landscape, but the initial standouts are performed in a looser, more freeform manner which suggests This Will Destroy You are less concerned with ticking emotional boxes, and more with tempting the listener to explore textures and territories not entirely within their comfort zones. So, we’ve ‘Villa Del Refugio’, seven minutes of drifting drone that ripples like the most engrossingly avant electronica but possesses a divine warmth that ensures only the truly frozen of heart won’t eventually allow to guide them to a level of synapsual arousal rarely encountered.

The quartet’s incorporation of 65daysofstatic-coloured clicks and bleeps on a couple of occasions – most notably the opener ‘A Three-Legged Workhorse’ and the penultimate ‘They Move On Tracks Of Never-Ending Light’ – also sets them aside from the more homogenised post-rock ranks as an act willing to just step out of line enough to be noticed, without becoming an annoyance. These additional beats aren’t blistering like those familiar to the Sheffield act of most convenient reference, though; instead they dance like mechanised insects above a still lake, the heart and soul of the pieces in question – the low sun on the water, the gentle breeze in the warm air – the held notes and sustained, well, moans. Few bands – Mono one immediately apt comparison, and subsequently an exception – can coax such lingering lusciousness from the most basic of elements: two guitars, bass and drums.

But nobody should approach This Will Destroy You anticipating new forms of a type of music that can often have its course plotted ahead of play, for better or worse depending on your personal opinions and tastes, with a decent degree of accuracy. What the inquisitive should expect is exactly the expected, executed with close to perfection precision. Quirks and deviances are here, as noted, but their short supply leaves the largest impression to be made by conventional builds and breakdowns, peaks and higher peaks – tracks like the sumptuous ‘Threads’ and rollercoaster closer ‘Burial On The Presidio Banks’. And the four-piece’s evident mastering of this wordless language ensures that their debut album is a true classic of its kind. EITS, and high-profile peers, take note: relative newcomers they may be, but This Will Destroy You are can’t-fail successors to the crowns that now rest so unsurely on your brows.