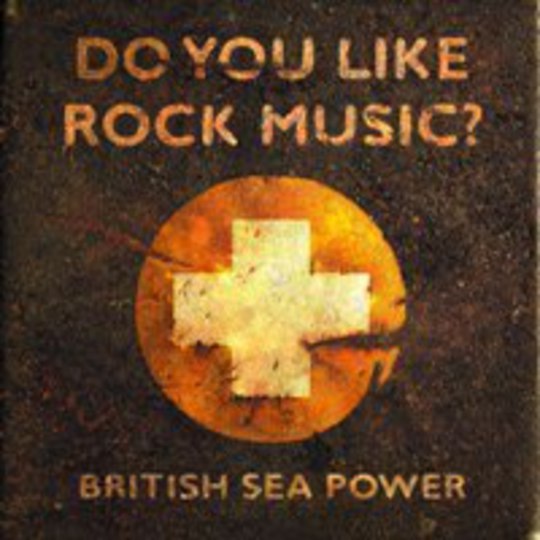 Having beckoned all in with a question as banal as it is brilliant, the muscular tide of ‘All In It’ ushers us back into the skewed world British Sea Power inhabit, and ‘No Lucifer’ rears up, all brawn and gusto. Cries to “give me the dummy, tit” are surrounded by familiar chants of “easy!”, a tribute to years of Shirley Crabtree Jr’s flailing fists and the grappling wrestling prowess of family favourite Big Daddy and his belly-gutted conquests.

But, away from the belligerent knuckles that The Decline of British Sea Power waved around so haphazardly, with bloodied lip and winded gut Do You Like Rock Music?’s heavy hands are a guileful flurry of throws rather than one solid blow, recklessly flitting between the delicate, retiring grace of Open Season and their rabid 2003 debut.

Bookending the record, ‘All In It’ and its curtain-closing reprise ‘We Close Our Eyes’ are largely redundant other than to provide amiable welcoming and parting shakes. Instead, as good manners fade, it's the calamitous Surfer Rosa hook to ‘Lights Out For Darker Skies’ that arrests attentions, darting infectiously as gusts of chamber noise break in and comfortably nestle alongside Yan’s trademark streak of Betjeman romanticism.

With Efrim Menuck (Godspeed You! Black Emperor), Howard Bilerman (Arcade Fire) and Graham Sutton (Bark Psychosis) all contributing at various legs of production - Czech plains, Canadian bunkers and the coastal climbs of pigeon shit-retreat Fort Tregantle all scaled - the modest charms of BSP initially seem engulfed by an opportunistic shift towards a post-rock pretence, as if making hollow calls to greying rock enthusiasts shifting ‘round Waitrose.

But this is their call to arms. Reverb drenches the awkward silences that once sat so starkly atop the anthemic hollering and as symphonies ring out for Slavic friends on ‘Waving Flags’ - a national anthem for those crossing eastern peninsulas for minimum wage - it’s clear the Cumbrian eccentrics have decided to open their arms to a wider audience, whether Shiraz-stained sophisticates or bopping cretins. The instrumental ode to gannet-pilfing Nordic seabird ‘The Great Skua’ most closely mirrors Open Season’s orchestral aspirations in its focus upon acute intricacies, but elsewhere strings are instead welded onto giant riffs to form crushing blows.

Rather than Yan’s rousing, Thin White Duke delivery, it is usual side-dish Hamilton’s modest rasp that contributes the defining leads, with his delirious delivery an uncomfortable brand of whimsy, beguiling as he pines on the withdrawn ‘No Need To Cry’, lecherously cooing “I don’t mind if you’re queer”.

That same uncomfortable bawl seeps in on the reckless disregard of ‘Down On The Ground’, a track that reared its snout from the trough on the recent Krankenhaus? EP alongside ‘Atom’, providing something between Clap Your Hands’ hurdy-gurdy headfuck and the Red Army Choir’s stoic roar. As gargled shouts and air raid sirens call out with Niels Bohr’s quantum conundrum causing concerns, it provides a track chaotic amidst the calm as ‘Open The Door’ tones down proceedings and Sea Power pick out their Sunday best to close.

Wired with a sense of opportunity, these little Caesars continue to play mother’s favourite rather than the ostracised gurning recluses they initially cast themselves as. Yet the trademark peculiarities remain. As with previous odes to arctic glaciers and ebbing tides, few others could bemoan with such nonsensical brilliance the loss of lives and football club records when estuary isle ‘Canvey Island’ was drowned out in 1953.