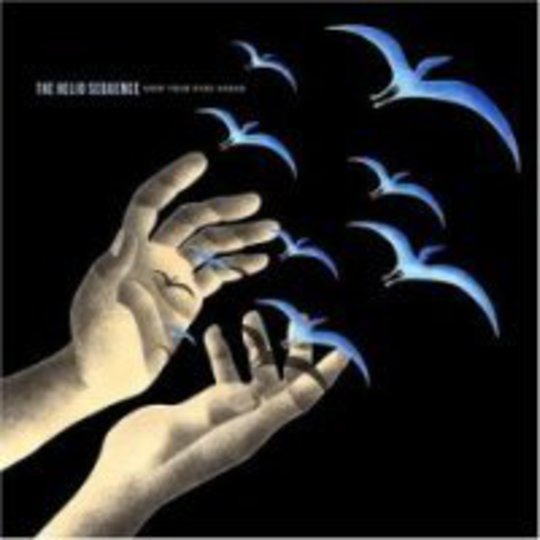 The Helio Sequence **had been hitting the campaign trail hard, spending much of 2004 journeying through the US and Europe with Blonde Redhead, Modest Mouse and Kings of Leon, attempting to get the good word out about their sumptuous Sub Pop debut,_ Love and Distance_. That their endeavours would see them elected to music’s high-table seemed a formality. It wasn’t. The relentless gigging eventually caught up with singer Brandon Summers and extracted a severe physical toll. Vocal chords shot to shit, he was forced to take a virtual vow of silence. For The Helio Sequence, it seemed it might be over before it ever truly began.

However, Summers was determined it wouldn’t end that way. He stopped self-medicating with whiskey and started a regime of vocal exercise and mic’ technique. And now, at last, the protracted silence is broken by the surging scream of_ Keep Your Eyes Ahead_, an album that feels as vital as the first, gulping breath of the near drowned. What this record means to Summers and partner Benjamin Weikel is apparent in the intense force of feeling.

The emotional shrapnel of ‘Lately’ cannot fail to pierce even the most cynical of souls, the difference between what is said and what is felt striking, “lately I don’t think of you at all, wonder what you’re up to, or how you’re getting on”. There is a futility to these attempted self-deceptions, our narrator all too aware that he can’t stop clinging to a love that’s long gone. The keys chirrup brightly, defiantly almost, but the haunting guitar line exposes the sham.

It isn’t only love that lies._ ‘Can’t Say No’ questions the veracity of the printed word, of adverts that order us to _“live well, but die fast”. It’s part of the modern condition, of living in a world that bombards us relentlessly with fact and fantasy, where all is instantly known, instantly available and kids’ heads filled with “download brainwaves”. But, even when expressing such profound dissatisfaction, such sadness, The Helio Sequence make it sound like the sweetest thing in the world, the hazy electronics meshing perfectly with drums and guitar to create dream pop.

This blessed-out state of being is evidenced elsewhere on_ ‘You Can Come To Me’, beats falling as satisfying as a thousand domino run, and ‘Hallelujah’, a night sky of staccato rhythms and twisted guitar spangled with celestial keys. Departing from lo-fi indie-electronica, ‘Shed Your Love’_ and_ ‘Broken Afternoon’ _are folk inflected tracks that rely on simplicity of songwriting to captivate. Smeared in bittersweet nostalgia the former is a finger-picking delicacy, whilst the latter is a twanging paean to the human condition.

‘No Regrets’ makes for a compelling final act its ramshackle melody and Dylan-esque harmonica quite unlike anything else on the pristine ten tracks that comprise Keep Your Eyes Ahead, an album whose deep felt emotion and effortless execution proves that there’s nothing like a little trial and tribulation to get the artistic synapses firing.