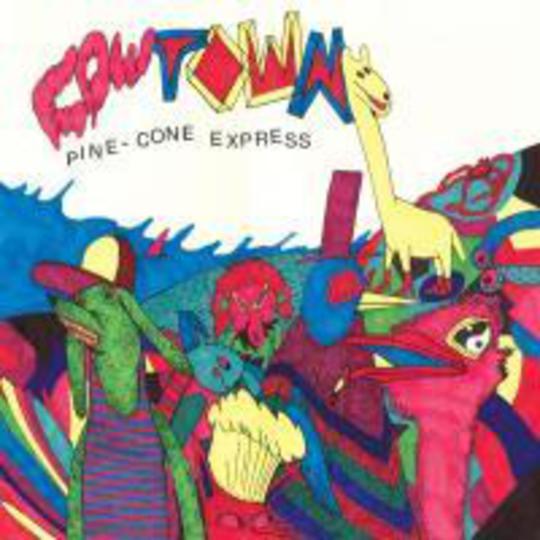 Cowtown are the soundtrack to your downfall, a haunting descent into a psychotic trench with four cretins rubbing salt on your wounds and breaking your already depleted spirits.

Slowly though, this plight gains a comfort, cider to numb the pain of the weeping sores and gallons of soft drink down your gullet to place you in a state of sugar-soaked derangement. As this idle bliss takes hold Pine Cone Express gains a compulsive quality as its frenetically spiralling waves of no-wave lap at your decaying mind.

The most obvious points of comparison for the Leeds-based quartet’s debut record come from Cowtown’s similarly ludicrous peers; ‘I’m In Your House Part 1’ opens events with Munch Munch’s toddler-baiting stomp, the curtailing sub-Deerhoof sprawl of Buttonhead as ‘Kitty Runs Away From Garlic’ runs rampant and the incessant diseased surf-punk of Agaskodo Teliverek on ‘Crab Pamphlet’. All unnecessary spiel - describing Cowtown accurately is about as feasible as herding cats.

Though ‘Slice Of Ketchup’ harps with Devo’s new-wave riot, occasionally it’s all taken a little too far as ‘Power Ballad’ pushes Cowtown to sweep their hair back and make like Simon Le Bon. Half the point, but half a headache; never far from sounding like inept musak as ‘Mr Pear Sandwich Man’ runs round in circles as it tries to find a wall to claw itself out the pit its dug.

Released on three different formats on three different labels, Cowtown will confuse. ‘I’m In Your House Part 2’ flouts itself again, a contentedly numb-skulled close. You wouldn’t want them in your house: they’d leave their slow-jawed crisp mastication with crumbs in every corner, crayons on the floor and urinate on your sofa as they slept. But from the comfortable distance of the stereo, away from their spreading of germs, they’re a distant delight.