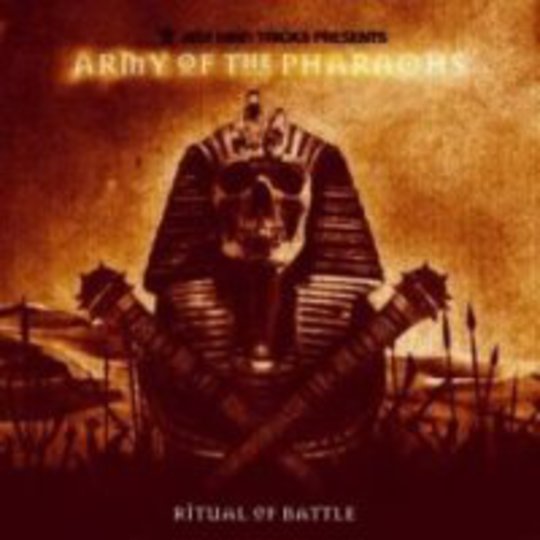 “Army of the Pharoahs never make love songs / We finger-fuck bitches with Freddie Krueger gloves on.” That cystitis-inducing line is the high point of the opening track here, the Wu-lite (six MCs, no hook, a lot of grunting noises buried deep in a muddy sounding mix) ‘Swords Drawn’. It should give you a good idea of what’s gonna go down on Ritual of Battle: it’s gonna be ign’ant, it’s gonna be violent, and there’s gonna be some gender inequalities abused. All of the good shit that rap can bring, effectively.

Except... the line is preceded about a minute earlier by the words,_ “I got kids from the internet seeking my approval like they send a friend request”. That’s not gangsta. And it’s this weird mix of _“lines that could come from Geto Boys songs” and “lines that could come from Gym Class Heroes” _songs that make _Ritual of Battle, if not a fascinating album, then at least a fascinating document of a scene in flux.

The Army of the Pharoahs roster comprises a mixed bag of MCs and producers from The Demigodz, Jedi Mind Tricks, Non Phixion, and pretty much every other mid-tier underground clique of the past decade. As a result, the album functions best as a document of the tension between the two trends in underground rap: now conscious rap has been rushed out of the exit (or converted into major label bombs like Lupe, Rhymefest, and Little Brother), guys on the minors have to find a new path. They can either reinterpret early ‘90s Tim Dog / Spice-1 / Eazy-E memes with tongue barely in cheek and stick to the glocks and pimpslaps (see ‘Murda Murda’ here, which comes across as Goth Dipset). Or, alternatively, they can just go some nerd-ass comic book shit and pointless namedrops for Warhammer players (the track ‘Blue Steel’ doesn’t, for some reason, contain any a la mode fashion poses, but does contain the line “I live in the darkness and dungeons with Medusa”). AotP seemingly can’t decide on the best course of action.

The actual best route of action would be for the group’s standout MC, Celph Titled, to hurry the fuck up and drop a solo album ASAP. Sticking, as he has throughout his career, to the basics (aggressive, punchy delivery, tight rhyming style, repeated references to his love fat girls and guns), the entire album proves he’s the best punchline rapper on the planet right now. For choice wordage, take your pick between “Slicing pussies / I’m a certified carpet cutter” or_ “Some say I’m gangsta rap / Others say I’m horrorcore / I say I’m Suge Knight at the 95 Source Awards” _being his two finest cuts.

On the other hand, the worst rapper here / currently in the industry is Esoteric. Basically, if the idea of a guy with a Boston whine calling himself _“The mighty Thor with the mind of Michael Moore” _strikes you as anything other than laughably bad, then maybe you may want to find a new genre of music to patronise.

The other MCs on the album all fall between these two extremes, but they all pull their weight. On the whole, they get decent beats to flow over as well: ‘Strike Back’ is straight-up late ‘90s Gang Starr, ‘Dump The Clip’ is based around what sounds like a thugged-out The King and I sample, and ‘Drama Theme’ is suitably horrorcore-revivalist. It’s all very atmospheric, very thick, but there’s just... for an album called Ritual of Battle, and based around what amounts to 15 out of the 16 tracks here being battle-orientated, there’s just not enough violence.

Instead of going out and catching bodies in the street, AotP occasionally sound like they’d rather sit at home and install a ‘Catching Bodies’ Facebook application. And then send you an invite for it twice a day. Not a bad album, not even anything less than an above average one just... a missed opportunity.