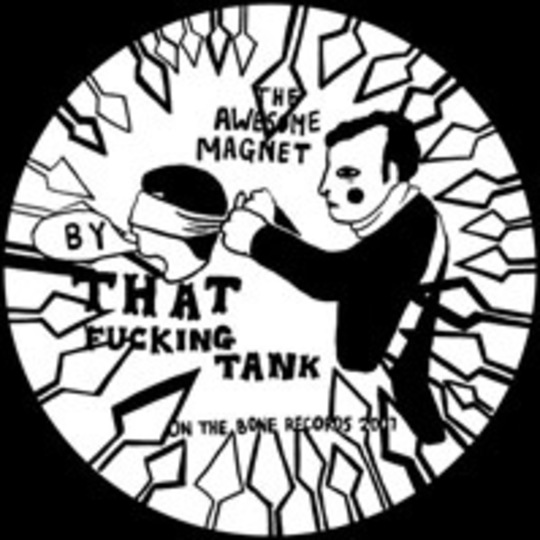 Leeds duo That Fucking Tank terrorised ear drums country wide during the promotional touring cycle of their Day Of Death By Bono Adrenalin Shot album; superbly brutal amplification and tub-thumping to the power of Battering Ram Squared made for a night out to remember… and remember… and remember… until a doctor’s appointment took care of the ringing. Primarily instrumental at the time – the time being last year – the Tank’s immediacy was stunning, like The Jesus Lizard mixing it up with Big Business, in a tar pit, in Yorkshire. Yes, fists were pumped.

‘The Awesome Magnet’, then, is an entirely unexpected left turn, featuring as it does really really clear vocals from a drafted in Giles Bailey, unprecedented in the Tank timeline. If anything, the outta-tune ('less my hearing's shot from so many TFT shows) vocals distract rather from what’s building beneath them, namely an atypical but no-less-classic Tank tempest of rollicking guitar ‘n’ drums violence. The result smacks hard and fast like the best Shellac, albeit stripped of said act’s trademark venom, but feels awkwardly at odds with its predecessors, releases that went for the jugular without any sideshow tricks on the periphery. Right now, that’s how these vocals go down: sticking in the throat and kinda sharp, like if Lightning Bolt did away with all that fuzz and bother blocking their wordsmithery. Just odd, really.

If ‘The Awesome Magnet’ is a purposeful step in a new direction then these ears will welcome the eventual progression with a cheery smile, but currently the Tank are caught between the rock and a hard-to-reach place, a territory their previous forays never came close to exploring. Time will tell, and until it passes this jury’s staying down the pub.