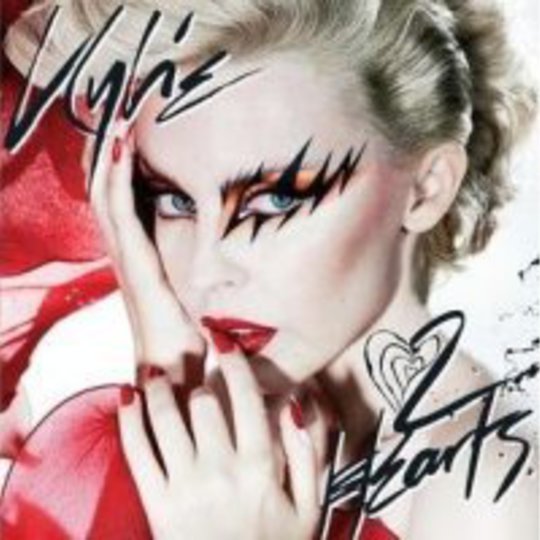 On first inspection it’s tempting to view the slightly spurious aura of cool Kylie’s fostered since 'Can’t Get You Out Of My Head' first dropped as a bit of a swizz. But a cursory glance at her lavishly-insured back catalogue will tell you what a distinguished track record of seven inches she’s enjoyed (boom, tish) post Y2K, from the Moroder-esque icy disco of 'I Believe In You', the arse-baring hi-NRG pop of 'Spinning Around' and the chorus-dodging 'Slow', which sounds like a missing highlight from LCD Soundsystem’s new record. These are heavyweights of the europop canon, and Whigfield be damned.

Sadly '2 Hearts' doesn’t belong in that pedigree, which has to rate as something of a disappointment as the most trumpeted comeback of her career. For the record, it’s a genetic three-way splice of the burlesque chic Christina Aguilera’s been peddling for the last 12 months to a worldwide chorus of mehs, Alison Goldfrapp’s vampish electro shtick and, quite literally, **Feist’s '1,2,3,4'. And as such it’s a bit over-thought, even if sallow-faced fans of the latter MOR songstress will be disappointed to know Kylie’s track whups her i-Pimped effort into a cocked hat.

In fact, you can rather imagine Lisa Scott-Lee rifling through the slew of discarded first-single suggestions in the bins round the back of the EMI offices. And good luck to her: chances are she’ll find something better than this, but then, so will Kylie, whether that’s two or two dozen singles down the line. Like her or lump her, Kylie’s arse is anything but history.